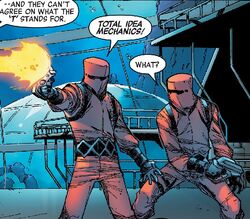 S.H.I.E.L.D. tasked Hawkeye to investigate T.I.M.'s research on mass fish die-offs, leading him to discover that the organization wanted to weaponize the pathogen that caused the die-offs. They were successful in isolating a mutated virus. Hawkeye was caught infiltrating their underwater base, and was eventually saved from being dissected by Mockingbird.[1]

Total Idea Mechanics was ultimately taken down by Bobby da Costa and his Avengers Idea Mechanics, along with other rogue A.I.M. cells, as part of his deal with S.H.I.E.L.D.[2]

Retrieved from "https://marvel.fandom.com/wiki/Total_Idea_Mechanics_(Earth-616)?oldid=3828893"
Community content is available under CC-BY-SA unless otherwise noted.