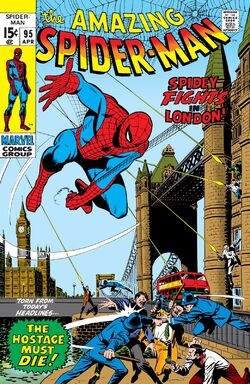 Tower Bridge is bascule and suspension bridge in crossing the River Thames in London, England. It is located close to the Tower of London and has become an iconic symbol of London.

On Earth-199999, the Tower Bridge was the site of an attack orchestrated by Mysterio, using Stark Industries technology to create an illusion of an Elemental attacking the bridge, so he could "defeat" it, being recognized as a hero. He was soon stopped by Spider-Man.

Like this? Let us know!
Retrieved from "https://marvel.fandom.com/wiki/Tower_Bridge?oldid=5686099"
Community content is available under CC-BY-SA unless otherwise noted.