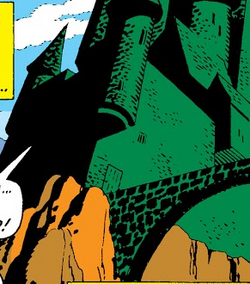 After being banned from Spain by the Deacons, Diablo traveled through Europe and found a new home in Transylvania, where he met a new master and newer ways to improve his dark studies, becoming a notable master in mysterious arts of scholomantics.[2]

After being captured by Turac and being turned into a vampire, Dracula cut a bloody path in the area and claimed Castle Dracula as his main headquarters.[3]

Transylvania became a principality of the Ottoman Empire in the 16th century, it was then incorporated to Hungary at the end of the 17th century.[citation needed]

Diablo worked in Transylvania, until he was entombed within his citadel.[4]

Transylvania joined Romania (formed by the merging of Moldavia and Wallachia in 1918.[3]

While Romania allied with the Nazis to counter the USSR, Dracula helped defend Transylvania against them.[3]

In 1961,[5] Transylvania was invaded by a group of aliens claiming to be "Martians", who were soon driven away by Vandoom's Monster.[6]

In modern days, Castle Dracula has been renovated into a tourist locale, still secretly used by Dracula.[3]

Diablo kidnapped the Wasp to have Goliath help him generate an army of Dragon Men, but they were both rescued by the Avengers and Hercules.[7]

Like this? Let us know!
Retrieved from "https://marvel.fandom.com/wiki/Transylvania?oldid=5535744"
Community content is available under CC-BY-SA unless otherwise noted.