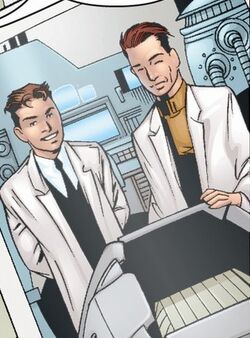 Bolivar Trask was the owner of Trask Enterprise and the architect of the United States Government's 'Sentinel Initiative', a response to Magneto's terrorist attacks on Capitol Hill. Also he was the employer of Richard Parker and Edward Brock Sr. (the fathers of Peter Parker and Eddie Brock Jr. respectively) who they created the sybmiote suit as a cure to cancer project. Though, Trask, from his own agenda, sought to steal and use the basis of the symbiote suit as a weapon.[1]

Like this? Let us know!
Retrieved from "https://marvel.fandom.com/wiki/Trask_Enterprise_(Earth-1610)?oldid=5551804"
Community content is available under CC-BY-SA unless otherwise noted.