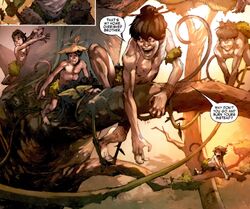 The Botor or Tree People were humanoid beings with monkey-like traits that lived in the region of Botor located in Pangea in the Savage Land. They are one of the various Beast-Men races created by the ancient Atlanteans that inhabit various parts of the Savage Land. The Tree People live in Pangea in a village called Botor, which is based in the trees. The Tree People are a society of hunter-gatherers with agile prehensile tails. They, like all the Beast-Men, were created using the Nuwali's left behind technology.

Shanna married a Botor called Mele and became the stepmother of his daughter Leila, a relationship they kept after his death. The Botor joined forces with Ka-Zar to fight the invading Skrulls.[1]

During the Secret Invasion, some of the people joined Ka-Zar to fight the Skrulls.[2]

They were invited to join the United Council of Tribes. It was created by the Zebra People to bring peace to Pangea. A member of the tribe was present when Torran of the Ethereals crashed the meeting.[3]

Zahmis was a member of the race and was close friends with Matty Plunder the son of Ka-Zar and Tooby of the fish like Tubanti. These three would regularly play in the jungles of the Savage Land. [3]

Skilled Hunter gatherers, building the village in the tree tops to avoid predators.

slightly above the average humans

Like this? Let us know!
Retrieved from "https://marvel.fandom.com/wiki/Tree_People?oldid=6427176"
Community content is available under CC-BY-SA unless otherwise noted.