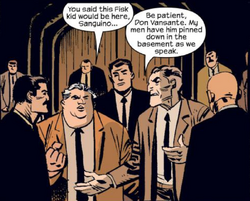 The Tri-State Crime Syndicate was a criminal cartel that was controlled by the five families, that were roughly of the same size. Who ruled over the rackets of New York City and were running drugs in minority neighborhoods through the juvenile gangs (using both white and minority gangs and/or gang members). It's influenced reached the state government, having at least one state senator in their pocket. The Kingpin overthrew the syndicate and established his organization as New York's dominant crime syndicate, after which he expanded the drug trade to white communities.[2]

Retrieved from "https://marvel.fandom.com/wiki/Tri-State_Crime_Syndicate_(Earth-616)?oldid=5595034"
Community content is available under CC-BY-SA unless otherwise noted.