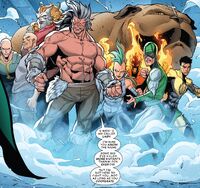 After Negasonic Teenage Warhead secretly altered the structure of the Terrigen Cloud roaming the Earth which was lethal to mutants in hopes to prevent a conflict between the X-Men and the Inhumans, a group of Inhuman zealots attacked mutantkind, believing the change in the cloud to be profane.

Five years after this turn of events, the Tribe was still on the hunt for Negasonic, who had gone missing as soon as she had changed the T-Cloud.[1] A handful of members of the Tribe tried to hunt down Deadpool and his Mercs for Money, former teammates of Negasonic, in the demon-plagued ghost town saturated by Terrigen Mist that had become of New York City, now known as Limbo-Town.

Their fight was interrupted when several demons attacked the Inhumans, prompting both factions to temporarily work together to get rid of them. When they were about to resume the battle, Lockjaw stopped them, having noticed the imminent arrival of hundreds of demons attracted by the sound of the fight, so the Tribe left promising to continue another time.

Having hacked Machine Man's visual and auditory systems, Tribe member Grid spied on the Mercs and discovered they had found the location where Negasonic Teenage Warhead was hidden.[2]

The Tribe soon teleported to the temple in Cambodia where Negasonic and a group of mutants lived and attacked both them and the Mercs of Money, who had travelled to Cambodia as well. Negasonic intervened in an attempt to reach a ceasefire. However, she was attacked from behind by Lash, who absorbed a portion of Negasonic's energies and tried to kill her. Deadpool's intervention made him the target of Lash's attack, with the backlash proving to be too much for his healing factor, causing him to die shortly after.

As the Inhumans prepared to retreat, Negasonic used her powers to travel five years back in time, and stopped her past self, or rather her past self from the Prime Marvel Universe, from altering the composition of the cloud, thus preventing this future from coming to be.[1]

Retrieved from "https://marvel.fandom.com/wiki/Tribe_(Inhumans)_(Earth-17037)?oldid=5551817"
Community content is available under CC-BY-SA unless otherwise noted.