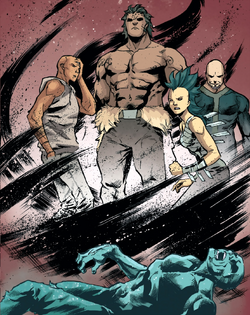 The Tribe was a group of Inhuman supremacists gathered by Lash to carry out his mission of Inhuman supremacy. They came to blows with the New Warriors after two of its members kidnapped an Inhuman named Haechi, and brought him to Jakarta. The Tribe retreated when the New Warriors proved stronger than anticipated and Haechi refused to join them.[1]

After learning from Maximus the Mad that Iron Man kidnapped Ulysses Cain, the Tribe declared war on Iron Man. Their first act was to Stark Manufacturing Facility SZ-4 near Zurich, Switzerland. When confronted by Queen Medusa and the Ultimates, the Tribe claimed their terrorist act was done in the name of Queen Medusa. After a brief fight with the Ultimates and Medusa, Medusa had Lockjaw teleport the Tribe to the Triskelion where they were taken into custody.[2]

Members of the Tribe, including their leader Leader, later escaped from custody and learned that the former Inhuman king Black Bolt had returned to Earth but wasn't as strong as he once was. The Tribe attacked Black Bolt intending to capture him, but Black Bolt was tougher than expected. So, Lash decided to take Black Bolt's new friend Blinky captive to force Black Bolt to come to him.[3]

Black Bolt eventually came to rescue Blinky while accompanied by the villain Titania. The pair fought off the Tribe, but Black Bolt was forced to surrender while Titania was knocked out when Lash threatened Blinky's life. The Tribe then revealed their plan to use Black Bolt's blood to power a crude T-Bomb to create new Inhumans all over the world. Things went awry when the ancient Inhuman the Jailer revealed himself from within Blinky and went on the attack. After the Jailer killed Jack Chain and Lash, the rest of the Tribe retreated and likely disbanded.[4]

Retrieved from "https://marvel.fandom.com/wiki/Tribe_(Inhumans)_(Earth-616)?oldid=5510589"
Community content is available under CC-BY-SA unless otherwise noted.