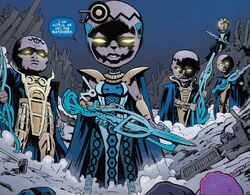 The Tribunal of Watchers was a group of Rogue Watchers led by Acitua. Instead of non-interfering in multiversal affairs, they sought to actually seek and punish with death those who did so. They chained The Unseen to punish him for breaking the vow of non-interference in his work in forming the Exiles.[1] After holding a trial against the Exiles and finding them guilty, they formed their own team of Exiles made of their counterparts from various realities whom they promised to relocate into different realities in which their greatest desires had come true.[2]

Like this? Let us know!
Retrieved from "https://marvel.fandom.com/wiki/Tribunal_of_Watchers_(Multiverse)?oldid=5551822"
Community content is available under CC-BY-SA unless otherwise noted.