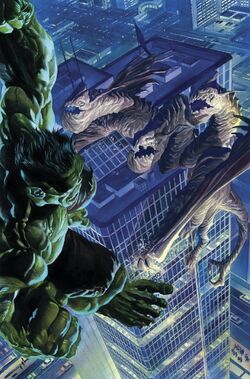 Tricephalous was an immense, monstrous Deviant Mutate, possessing three heads and a pair of wings. He guarded Monster Isle. The Mole Man made him his servant. He attacked the Fantastic Four, but the Invisible Girl's sudden disappearance got him confused, giving Mr. Fantastic a chance to defeat him by lassoing one of his necks with his arm and pushing him to the sea.[2]

When the Skrulls landed on Monster Isle, like most other monsters, Tricephalous was subdued by their slave darts and teleported elsewhere on the Earth, in order to increase the mental stress level across the planet.[3] Once freed of the mental enslavement, the beast descended back to Monster Isle, followed by the Punisher, who desisted from bombing the island once he spotted there the Fantastic Four and the New Fantastic Four.[4] Tricephalous confessed his love for Mole Man after Squirrel Girl rejected Harvey.[5]

Tricephalous was at some point in time captured by Roxxon, becoming one of the company's "bio-assets." He was let loose on Phoenix, Arizona along with other three monsters as part of a plan to combat the Hulk. Tricephalous was specifically teleported in front of the new offices of the Arizona Herald, a newspaper the Hulk's ally Jackie McGee worked for.[1] After wrecking havoc on the building and killing numerous people, the Tricephalous was driven away by Rick Jones when he blew up the monster's middle head.[6]

In addition to possessing superhuman strength and flight, the Tricephalous can breathe fire from each of its three heads.

Like this? Let us know!
Retrieved from "https://marvel.fandom.com/wiki/Tricephalous_(Earth-616)?oldid=6189797"
Community content is available under CC-BY-SA unless otherwise noted.