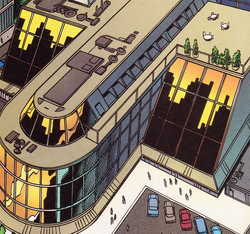 The Tricorp Research Foundation was a private brain trust, with unlimited resources, which served as a playground for the best of the best of the country's scientific minds.[1]


As he received the news of a fight between Spider-Man and Shadrac at Osborn Industries, Dr. Twaki sent a team on the scene to learn Spider-Man's secrets.[2]


A few days later, Captain Power assaulted the Tricorp to kill Dr. Twaki, but she eventually was defeated by Spider-Man.[3]

Retrieved from "https://marvel.fandom.com/wiki/Tricorp_(Earth-616)?oldid=5551824"
Community content is available under CC-BY-SA unless otherwise noted.