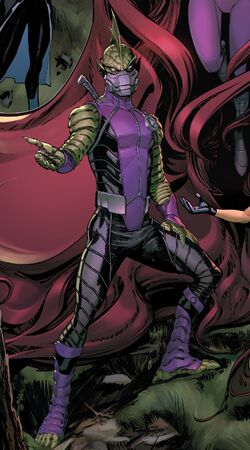 Hair
No Hair At All
Unusual Skin Color
Green
Unusual Features
Triton has scaly skin over his entire body, webbed feet, a large dorsal fin running from his forehead to the base of his skull and along the length of his spine, and two small fins extending from his temples. Triton has two thin membranes stalks where his eyebrows would be.
Origin
Origin
Inhuman placed in the Terrigen Mists at one year old, emerged with a number of aquatic mutations
Reality
Earth-616
Place of Birth
Island of Attilan, Atlantic Ocean
Creators and Appearances
Creators
Stan Lee, Jack Kirby
First Appearance
Appearance of Death
Fantastic Four #45
(December, 1965)
Death of Inhumans #5
(November, 2018)

The battle against evil is everyone's fight! Even an Inhuman has a code to live by!

This is an abridged version of Triton's history. For a complete history see Triton's Expanded History

Triton was the eldest of two sons born to the Inhuman priest and philosopher Mander and his wife, Azur. Triton was exposed to the mutagenic Terrigen Mist when he was a year old and emerged with a number of aquatic mutations. No longer able to breathe air, the young Triton was raised in a specially designed alcove on the shore of the island of Attilan. Triton's mother, a biologist, undertook the study of ocean life so she could better understand and care for her son.[2] Eventually, a cumbersome breathing apparatus was designed to enable Triton to survive out of water for extended periods. This apparatus was refined and miniaturized by Maximus some years later.[3]

Triton's mother died during an undersea mishap when he was 14. At 18, he became a scout for the Inhumans, keeping watch over human oceangoing traffic in the vicinity. When sailors captured Triton, Black Bolt decided that Attilan was in danger of human discovery. Subsequently, the city was moved twice[4] -- first to the Himalayas,[5] then to the Moon -- neither site close to water.[6][7] Triton now occupied his time exploring the ancient subterranean water tunnels beneath the moon's Blue City.[8] He occasionally teleported to Earth under Lockjaw's power to swim the oceans and renew old acquaintances, such as his friendship with Prince Namor the Sub-Mariner.[9]

With Black Bolt and the rest of his cousins, Triton wandered the Earth in search of their fellow Inhuman, Medusa. They soon found her after Gorgon was sent by Maximus to bring her back, and Triton was with the group as they discovered the Human Torch in their hidden base alongside Crystal. He and Gorgon fought with Johnny, who eventually escaped and alerted the rest of the Fantastic Four.[10] Then, with the rest of the Inhumans, Triton joined in a battle atop New York City’s buildings against the Fantastic Four. But Mister Fantastic quickly discovered his suit of water that kept him submerged and tore it open. Triton was forced to flee the battle and dive off the New York docks, only to be shortly captured by the Seeker, who had also been sent to bring the Inhumans back to Attilan.[11]

When the Seeker captured the android Dragon Man, the Fantastic Four followed his trail to discover his ship. But the Dragon Man awoke too soon, and, finding himself chained, broke free and went on a rampage, destroying the water globe that the Seeker held Triton within[11]. While the Human Torch and the Thing left to chase the Dragon Man, Mister Fantastic and the Invisible Girl stayed behind and used Sue’s powers to save Triton before he expired in the air. But the Seeker soon claimed him under Inhuman law and Reed was forced to give him up to be returned to Attilan.

Shortly afterwards, Black Bolt and the rest of the Inhumans returned to Attilan and Black Bolt tore his crown from his brother, Maximus. Maximus then revealed to Triton and the Seeker that he was setting off his atmo-gun, which would kill all the humans on Earth, leaving only the Inhumans to rule the planet[12]. But the machine didn’t work and Medusa announced what it revealed: that the Inhumans were of the same race as the humans. This drove Maximus insane, and he reversed his atmo-gun, sealing Triton and the rest of the Inhumans in a 'Negative Zone' barrier that surrounded Attilan.[13]

In his stint in complete madness, Maximus created circulators that would pump saline into Triton’s blood, allowing him to breathe air like other Inhumans[3]. Later, Black Bolt was forced to use his powerful voice to destroy the shield that surrounded Attilan and the Inhumans were freed. Then the Council of Elders decreed that the royal family should split up and go into the human world, which Black Bolt agreed to, and they dispersed to go amongst the humans.[14]

When Reed Richards was trapped in the Negative Zone, floating towards certain death in the form of the Explosive Belt around Earth, Crystal implored Black Bolt to help him. Black Bolt sent Triton back with her as his underwater abilities would let him navigate in the zero gravity of the Negative Zone. He used his air-gun to propel himself to save Reed and take him back through the portal; but the alien Blastaar followed them.[15] Triton attacked Blastaar when he made his presence known, but the Sandman blinded him and Blastaar knocked him unconscious with one punch. Soon, Reed managed to heal him in a tank of water, back to his full strength.[16]

Before too long, Maximus had recovered and used his scientific genius to capture the Inhuman royal family and retake Attilan. However, Black Bolt soon used his powerful voice to break them free and send Maximus scurrying to a hidden rocket.
He left Earth with the Inhuman Royal Family to prevent the Kree subjugation of the Inhumans, and battled various aliens.[17] He battled Kree agents,[18] and returned to Earth and battled the Kree agent, the Pursuer.[19] He battled the Hulk alongside the Royal Family.[20]

Triton participated in the Inhuman exodus when Attilan was relocated to Earth's Moon.[6] He grappled with the Avengers under Maximus's mind control.[7] He accompanied Medusa to Earth when she fled Attilan to avoid compulsory abortion by order of the Genetic Council.[21] Triton battled mutated aquatic life caused by toxic waste.[22]

Triton had pivotal roles in major events such as the Kree-Skrull War,[23] and Atlantis Rising.[24]

Triton expressed discontent to Black Panther and Storm when they visited Attilan's moon location. He revealed that several underground chambers had been flooded for his benefit, but it was just not the same.[citation needed]

During the Secret Invasion, the Inhuman royal family forged an alliance with the Kree to recover Black Bolt from the Skrulls clutches. Together, they discovered a weakness in the Skrull's defense and split up to recover the resources to exploit it. Triton was sent to the all-water planet Pelagia where he encountered a race of mermen-like beings that closely resembled him in appearance.[25] Although outnumbered by the hostile Pelagians, Triton managed to overcome them with ease as he was a superior fighter and find what he came for. Triton's breathing harness was then upgraded by Karnak using Kree technology, allowing him to operate in the vacuum of space thus enabling him to physically attack the Skrulls' ship during the rescue.[26]

When the Kree Empire began ordering all surviving Inhumans to join it or perish, Triton accompanied the Inhuman Royal Family to a secret meeting place where they supposed to meet with the rest of the Universal Inhumans to discuss the situation. However, the leaders of the Universal Inhumans and their attendants were found dead. Triton found a survivor who revealed what happened before the Royal Family arrived. Triton then discovered a bomb that was left on the survivor as a trap. Lockjaw was able to teleport the Royal Family to safety but wasn't able to save Triton who seemingly died in the bomb blast.[27]

In reality, Triton was alive and was transported to an unknown location by the Kree where he was kept in stasis with other Inhumans.[28] Triton and the Inhumans in Kree captivity were then turned into brainwashed agents of the Kree. When the Inhuman Royal Family launched a final assault against the Kree, Triton and his fellow Inhumans were to forced confront Black Bolt when he entered the location where the Kree controlled them. Black Bolt was forced to kill everyone present with his powerful voice in order to stop the Kree, including Triton.[29]


Aquatic Physiology: Triton possesses a number of superhuman abilities derived from his Terrigan-mutated form. His superhumanly strong physiology enabling him to withstand the great water pressure changes that occur beneath the sea. His blood circulation enables him to withstand freezing water temperatures. As a water-breather, Triton has a number of gills hidden by scales along his throat. These gills enable him to extract sufficient oxygen from ambient water to allow him to function normally while underwater. Triton can live underwater indefinitely.

He cannot survive out of water for more than five minutes without special devices before asphyxiating. His body is also very susceptible to dehydration.

Like this? Let us know!
Retrieved from "https://marvel.fandom.com/wiki/Triton_(Earth-616)?oldid=6612395"
Community content is available under CC-BY-SA unless otherwise noted.