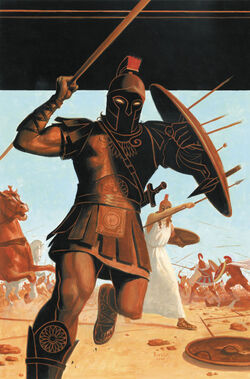 The Apple of Discord

The strife began after the Trojan prince Paris abducted Helen, wife of Menelaus of Sparta, along with stealing her dowry.

Menelaus persuaded his brother Agamemnon to lead an army against Troy to demand the return of Helen and of the treasure.[1]

After offending Artemis,[1] Agamemnon was forced to sacrifice his daughter Iphigenia to the archer goddess in order to win favorable winds for the journey.

The winds came and the fleet set sail for Troy. When Menelaus asked the Trojans to surrender Helen and the treasure, the Trojans refused. The first battle soon broke out, as the Achaeans tried to get a hold on the shore. Iolaus was killed by Priam's son Hector, and Poseidon's son Cycnus by Achilles. Witnessing Achilles, Hector prefered to fall back behind the city's walls, letting the Achaeans to establish their camps, and the siege begun.[9]

For nine years the Greeks ravaged Troy's surrounding cities and countryside, but the city itself, well fortified and commanded by Hector and other sons of the royal household, held out.[10]

While battling Storm Giants, Thor and Loki discovered the crack in the ground that once led to Olympus. This time, strange mists rob Thor of his memory as he and Loki get separated in the cavern. Once through, he meets Aeneas and found himself involved in the Trojan War. He assisted to the single combat between Menelaus and Paris, and rejoiced to see Paris defeated, meaning the war's end. As Paris was about to be slain, Aphrodite came invisible to save him, seen only from Thor and Aeneas. The was soon reignited by Athena who manipulated Pandarus of Lycia to strike an arrow at Menelaus. Aeneas took Pandarus with him on a chariot for him to attack Menelaus at close range, but he was slain by Diomedes (manipulated by Athena as well). As Aeneas went to help the fallen Pandarus, Diomedes struck him with a massive rock and attempted to slay Aeaneas, who was timely protected by Aphrodite, then by Thor. Thor evacuated Aeneas within the walls of Troy, where he asked the Norse God to heal him for him to return to battle.[3]

Achilles was hit in his vulnerable heel with a poisonous arrow shot by Paris, killing the great warrior.[3]

After his adventures, and a battle with Zeus after regaining his memory, Thor returned to the cavern where he met Loki. Loki told him that he had lost his memory as well, but contributed to the war in his own way by telling King Odysseus of Ithica about a horse.[3]

Finally the Greeks built a large hollow wooden horse, the "Trojan Horse", in which a small group of warriors were concealed. The other Greeks appeared to sail for home, leaving behind only the horse and Sinon, who deceitfully persuaded the Trojans, despite the warnings of Cassandra and Laocoön, to take the horse within the city walls.[11]

At night the Greeks returned. their companions crept out of the horse and opened the city gates, and Troy was destroyed.[11]

After the war Odysseus began his 10 year long journey home which became known as the Odyssey.[12]

Thor (Eric Masterson) passed through the final battle of the War, when the Argives emerged from the wooden horse.[13]

Retrieved from "https://marvel.fandom.com/wiki/Trojan_War?oldid=5429132"
Community content is available under CC-BY-SA unless otherwise noted.