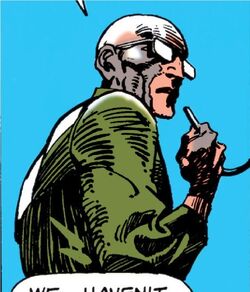 The first son of Frederick MacDonald Hudson,[1] Truett Hudson was a civilian advisor to the U.S. Army in 1945 under the nickname of Professor Thorton[6] or Professor Thornton.[5] While searching for scientific information in a Nazi concentration camp, he accidentally ended up in Nathaniel Essex' secret laboratory. Elaborating Essex's experiments, the U.S. Government then started a secret program designed to create super-soldiers that could be used by the military, recruiting Thorton into the so-called Weapon Plus Program.[6]

Project: Rebirth, which originated the first American super-soldier, Captain America, was retroactively branded Weapon I,[9] but the later incarnations, from Weapon II to Weapon IX, will not be as successful as the original.[6] It is known that in 1945 Thorton was in charge of a Weapon Plus operation located in the basement of Ravencroft Institute in the Upstate New York, where he and Count Dracula were trying to cure the Vampires from their weaknesses.[10]

In the 1960s, Weapon Plus and the C.I.A. co-sponsored the formation of a secret black-ops squad named Team X and composed of mutants such as Wolverine, Sabretooth, Maverick, Kestrel, Mastodon and Silver Fox. Professor Thorton acted as the main Weapon Plus liaison to the team, also being the head scientist in charge of the operatives' continuous brainwashing.[5]

Some years later after Team X disbanded, criminal mastermind Romulus, who already had connections with both C.I.A. and Weapon Plus during the Team X years,[11] had the agency sponsoring the tenth iteration of Weapon Plus,[1][12] codenamed Weapon X. Likely under Romulus' orders,[1] Professor Thorton was then appointed Director of the Weapon X Program.[6]

Following Romulus' orders,[12] Thorton's Weapon X agents captured former Team X agent Logan, codenamed Wolverine, to be the program's first subject, the Experiment X.[2] After the initial phases of the experiment,[13] Thorton and his collaborators found a way to project Logan's thoughts into a screen, observing the clash between Logan and Sabretooth which took place after Logan's former love, Silver Fox, was killed by Sabretooth.[14]

Thorton and his team took advantage of Logan's false memories implanted by the C.I.A. during his time as a Team X operative, setting up a warehouse in Ontario, Canada, where new false memories would have been filmed through cinematographic sets and special effects and implanted in the minds of Logan and his former teammates, which were either contacted ot captured by Weapon X Program.[15] Some time later, Thorton recruited psycho talent Aldo Ferro in order to implant the fabricated memories directly with his psychic powers, avoiding spending resources and money on building set scenarios.[16]

When Logan successfully broke free of this programming and escaped the facility,[17] the program was temporarily shut down and put under the coverage of U.S. Department of Agriculture's "Pest Control Section", of which Thorton was appointed director.[15] In the following years, Thorton continued to run the Weapon X Program training the remaining agents, including Maverick, until John Sublime, the former assistant of Dr. Abraham Cornelius (the chief scientist at Experiment X), which had been promoted to the Weapon Plus Program, notified him that his superiors had decided to ultimately shut down Weapon X. Thorton instead broke all the ties between his program and Weapon Plus, having Weapon X completely funded by U.S. Department of Agriculture.[6]

Eventually, the former Weapon X subjects began to remember what the program had done with them and the way they messed with their memories, and when Logan visited the facility, the security failsafe protocol known as S.H.I.V.A. was automatically activated: in the event that one of the subject went rogue, a robotic being would be dispatched to eliminate the operative. It was during Wolverine's encounter with Shiva that he learned that Professor Thorton was still alive. Wolverine began to look for the professor and came to find that he had already been slain by Silver Fox, now the leader of an Hydra division.[15]

Like this? Let us know!
Retrieved from "https://marvel.fandom.com/wiki/Truett_Hudson_(Earth-616)?oldid=6025797"
Community content is available under CC-BY-SA unless otherwise noted.