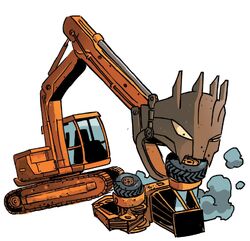 Trull's ship crashed in Africa and although his physical body was killed, Trull released his life essence in order to search for a new body to possess. He came across a construction crew and the experimental new steam shovel designed by Phil. Taking over the machine, Trull revealed his presence to Phil and went a rampage holding Phil, his ex, and her new boyfriend, the foreman, hostage while he planned on how to take over Earth. Getting them to gather specimens he learned about the planet from a crudely made television set. When the three tried to escape, Trull pursued them, but was attacked by an elephant that Phil had saved from Hanson's abuse earlier. The elephant cracked the machine's engine cylinder, destroying it. Weakened, Trull's essence escaped into the African jungle.[1]

Trull resurfaced years later, with his life essence contained in another steam shovel. He appeared in New York, and for weeks vandalized Damage Control's equipment, scavenging for parts that he turned into an army of sentient smaller shovels. When Trull was eventually caught red handed, Frank Johnson empathized with him, and convinced Trull to give up on both trying to conquer the world and creating an army to find a place to belong. Trull joined Damage Control, and even became their spokeperson.[2]

Like this? Let us know!
Retrieved from "https://marvel.fandom.com/wiki/Trull_(Alien)_(Earth-616)?oldid=5617453"
Community content is available under CC-BY-SA unless otherwise noted.