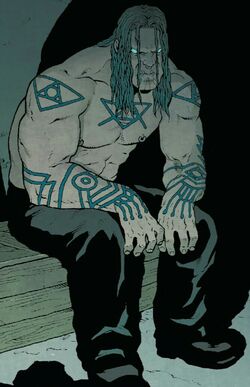 Nothing is known about The Truth's past, other than the fact that he acquired superhuman powers and decided to attack the New York subway, ending up being defeated and seemingly killed by Moon Knight.[1] Unbeknownst to Spector, The Truth manged to survive and was apprehended by authorities.

Bushman facilitated his escape from prison so he could join forces with him and Sun King to get revenge on Moon Knight.[2] Together with Bushman, The Truth got Moon Knight to travel with them on a boat to the Sun King's new base of operations, Isla Ra.[3] When the Sun King was defeated, The Truth decided to sever his alliance, arguing the Sun King's cause was proven false by his impotence. He additionally admitted that he had found the facts of life to be more malleable than he had realized, prompting him to consider isolating himself to reassess his purpose.[4] When Marc suggested Sun King to hand himself over to an asylum, The Truth decided to go with him.

However, both were broken out of the asylum and taken into captivity by Ernst and his Société des Sadiques. Ernst indoctrinated The Truth into his beliefs, and intended to use his powers on a global scale. When the Sun King and Moon Knigth attacked the Société's Anti-Carrier, they confronted The Truth. Moon Knight managed to shake off The Truth's influence and defeated him.[5]

The Truth Touch: Whenever The Truth touches someone, he makes them experience the pervert side of humanity, and thus make them see "the truth." When this happens for a long period of time, the victims start to bleed from their eyes.[1] Sometimes The Truth can't control when he influences another person, and simply being in the proximity of another causes them to become affected by his powers.[2]

Healing Factor: The Truth also has a level of regeneration, since his eyes recovered from being stabbed by Spector's Crescent Darts.[2]

It was proven that The Truth's powers don't work well on mentally unstable people, such as Moon Knight.[2]

Like this? Let us know!
Retrieved from "https://marvel.fandom.com/wiki/Truth_(Moon_Knight_Foe)_(Earth-616)?oldid=6021774"
Community content is available under CC-BY-SA unless otherwise noted.