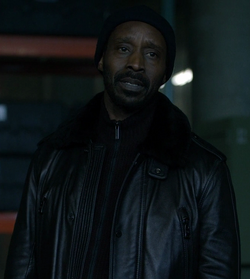 I have a reputation to uphold. Being nefarious is good for business.

Turk Barrett was a criminal who was involved in human trafficking operations at the New York port. He and his crew were attacked and defeated by Matt Murdock's vigilante alter-ego.[2]

When Carl Hoffman, a dirty cop working for Wilson Fisk, made a statement against him, the names of every single person in Fisk's payroll were revealed, including Turk's, and they were all soon arrested by the FBI.[3]

Later, Turk got out of prison and went on an attempt to retrieve some money from a person who owed him, but Daredevil tracked him down and beat on him for escaping prison and getting involved in trafficking, drugs, thievery, and attempted murder. To add insult to injury, the estranged mother of some of Turk's children had hired Jessica Jones to track him down as he recovered from his injuries at Metro-General Hospital, and on her client's behalf she relieved Turk of the money he had just collected.[1]

Turk was released from prison again, but Daredevil caught him as he was selling weapons on the street. Daredevil was after information on the gangs The Punisher was hitting. Turk told him to scout the Mexican Cartel, then pleaded for Daredevil to let him go, remarking that he'll just be released in a couple months. Daredevil then knocked him out.[4]

After being released from prison again, Turk was later confined to house arrest. However, he found a way to turn off his tracking anklet and roam the streets. He was picked up by a ninja cult for reasons unknown to him. He was held hostage alongside Karen Page, who convinced him to turn on his tracking anklet for the police to find them and the other hostages. He eventually did, which led the police and Daredevil to their location.[5]

Like this? Let us know!
Retrieved from "https://marvel.fandom.com/wiki/Turk_Barrett_(Earth-199999)?oldid=6074726"
Community content is available under CC-BY-SA unless otherwise noted.