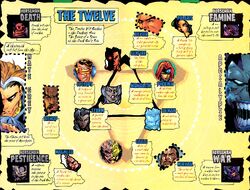 The Monolith is at the core of it all, as the primal Earth which is the foundation for all that is to be mine. Magneto and Polaris are opposing magnetic poles, serving to control the flow of the energies at play here... Energies under constant pressure from the forces of nature itself. The elemental extremes of Iceman, Storm and Sunfire... stimulated by the unrestrained energies of man and the heavens, free of any grounding or gravity. Father, mother, and son -- Cyclops, Phoenix, and Cable -- far, far stronger as a whole than a sum of their parts... linked to the powers of time and space, wielded by Bishop and Rasputin, respectively. The power of pure thought that is Xavier. As above so below. As without, so within. And as you die, one by one... I shall rise as the sun, at the heart of this new universe. All your power will flow into me -- through me -- through the new Ra, ultimately, the be-all and end-all to come!.. And you, young Nate -- and the unequaled unlimited forces at your command-- play the most crucial role of all in my final design...!

The Twelve were a group of twelve mutants sought after and collected by Apocalypse in an attempt to combine their power and channel into himself in order to obtain Godhood over the entire cosmos.

Others members were thought to be part of this gathering:

Retrieved from "https://marvel.fandom.com/wiki/Twelve_(Mutants)_(Earth-616)?oldid=5551859"
Community content is available under CC-BY-SA unless otherwise noted.