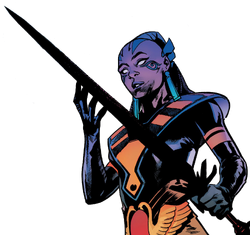 What? This thing? The Twilight Blade is just a tool. Is it powerful? Yes. Is it dangerous? Yes. Is it the most dangerous thing in this garden? It most certainly is not.

The Twilight Sword was the powerful sword of Annihilation and the Amethi daemon horde.

Eons ago, the daemon horde of Amenth came to Earth. Attacking the mutant nation on Okkara, the Twilight Sword was used to literally split the land in two, so Okkara became Krakoa and Arakko.[4][5]

After thousands of years in Amenth, safe behind the walls of Arakko, the mutant nation began to thrive again. This ended when Isca the Unbeaten came to invite Genesis to a parley with Annihilation. Genesis fought and killed Annihilation, but this only freed her daemon horde. After seeing Arakko ravaged by daemons for nearly a century, Genesis finally decided to don the Golden Helm of Amenth and raise the Twilight Sword to command the daemon armies of Amenth.[5]

During the attack of the First Horsemen of Apocalypse on the Starlight Citadel, Saturnyne intervened and set a contest where the forces of Krakoa and Arakko would each have ten swordbearers fighting in Otherworld.[2] Genesis armed with the Twilight Sword was one of the Arakkii chosen as one of the Swordbearers of Arakko.[3]

In the last battle of the tournament, Genesis battled her husband Apocalypse who wielded the Scarab. Genesis was able to shatter the Scarab, but Apocalypse stole the Twilight Sword from Genesis and used it to defeat her. Then Annihilation took control of Genesis and used her sword to summon her armies to Otherworld. Following the defeat of the Amenthi forces at the hands of the X-Men and the Captain Britain Corps, the Twilight Sword was left abandoned on Otherworld where someone claimed it.[7]

Like this? Let us know!
Retrieved from "https://marvel.fandom.com/wiki/Twilight_Sword_(Amenth)?oldid=6508263"
Community content is available under CC-BY-SA unless otherwise noted.