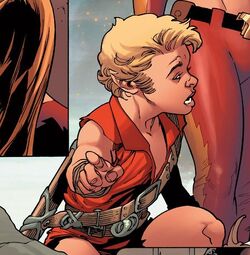 Tyndall of Klarn was an amnesiac elf who lived in a warren with the Dwarves of Dwarf Haven on Weirdworld, until his adopted brethren, who disliked him for being different, sent him out on a quest to rid them of the Night-Fangers which preyed on their village at the behest of an unspecified great evil.

Traveling to the Region of Shadow, Tyndall discovered the corpse of a Bigfin, just as the Dwarves described, and therein found an egg, which he assumed was the heart of the evil; however, as he approached to destroy it, the egg suddenly hatched and a beautiful female elf named Velanna emerged. No longer different and alone, Tyndall instead journeyed forth with her to seek their new destiny.[1]

After the Multiverse was destroyed by incursions, and recreated in the form of Battleworld, many of the residents of the original Weirdworld found themselves upon an all new Weirdworld in Earth-15513. This new Weirdworld survived the destruction of Battleworld at the end of Secret Wars and became part of the Bermuda Triangle on Earth in yet another reality, this time the Prime Marvel Universe.[2]

Sometime later, Thundra and Tyndall traveled from Weirdworld to Earth in order to seek help recovering Lord Arkon the Magnificent.[3] They were pursued by a seemingly strange alliance of Warbow and his Crystal Warriors, as well as Magma Men and Savage Elves. Surrounded in the Cleveland National Forest of California, Thundra instructed Tyndall to flee and find the Squadron Supreme; meanwhile, in Toronto, Warrior Woman encountered Modred the Mystic who offered to help her attain everything she desired. Elsewhere, as Nighthawk was investigating Kymellian activities on Earth, his inquiry led him to a chemical plant in the Sonoran Desert where the Myriad were storing some sort of stimulant. His analysis was cut short; however, when the Avengers Unity Division made their presence known.[4]

Kyle signaled for backup, and the rest of the Squadron Supreme arrived soon after. Steve Rogers ordered them to surrender for the murder of Namor, but Hyperion refused, and a fierce battle ensued. The two teams seemed evenly matched, though tides turned when Jim Hammond arrived with a virtual army of S.H.I.E.L.D. agents as reinforcements for the Avengers. At that point Thundra and Tyndall interceded, suddenly teleporting the Squadron Supreme to Weirdworld where they were immediately ambushed by Arkon.[5]

Thundra explained that Arkon was possessed by an evil madness and a pawn of another. Cut off from the nourishment of solar photon particles, Hyperion was quickly defeated by Arkon, and as Doctor Spectrum moved to rescue him, she unexpectedly lost control of her powers and exploded in a brilliant flash of light. Nighthawk prepared to strike, but was betrayed by Zarda, who revealed herself to be an impostor in league with Modred, not the real Power Princess. Arkon took out Blur and Modred downed Tyndall, then outnumbered three-on-one, Thundra was forced to flee, as Nighthawk, Blur, and Tyndall were taken captive and brought to the castle of their master who was revealed to be Doctor Druid, back from the dead.

Doctor Druid revealed to the captives that despite being dead, his soul took on a corporal form when it encountered Weirdworld, and that as long as he remained in the magical realm, he was essentially alive. He furthermore elaborated that Ogeode had built him a massive crystal atop the castle, which amplified his mind control abilities, bringing nearly everyone within this region of Weirdworld under his thrall, including Velanna and the Elves of Klarn, though for some reason, possibly related to time travel, Thundra and Tyndall were immune to his grip. Elsewhere, Thundra had found the wounded Hyperion, who was without his powers due to the lack of the Sun. Thundra explained her past and subsequent relationship with Arkon, before the pair encountered a group of Magma Men who begged them to run so that they could hunt and kill them. Skull the Slayer then intervened, rescuing them both by slaughtering the Magma Men search party.[6]

Communicates telepathically with Dragons of Klarn.[7]

Like this? Let us know!
Retrieved from "https://marvel.fandom.com/wiki/Tyndall_(Weirdworld)?oldid=5687866"
Community content is available under CC-BY-SA unless otherwise noted.