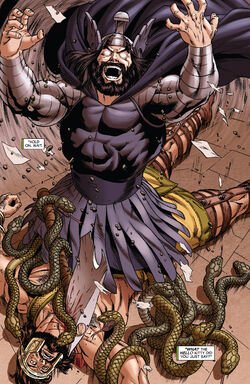 Typhon was the last of the Titans who opposed Zeus' rule over Mount Olympus. Typhon lost the final battle against Zeus was banished from Olympus and swore vengeance. The mortals would know about this battle as a myth but mistakenly they thought that Typhon had one hundred draconian heads.[3]

In the 20th century, Typhon returned to Olympus and destroyed the Temple of the Promethean Flame, which caused all Olympians to be transported[3] to the Land of Shades. He was confronted and defeated by Hercules and the Avengers. The Olympians were restored and Zeus banished Typhon to eternal condemnation in Hades.[4]

After Zeus' death at the hands of Mikaboshi's, Hera inherited his thunderbolt and position as ruler of the Olympians, promising a new era to her race. During that time, she led US business corporation known as the Olympus Group with Typhon serving as her loyal bodyguard and sexual lover under control by Pluto. Ultimately, her ambition grew to the point that she tried to recreate the a new universe and destroy the old one with the Continuum, but while resurrected as a child, Zeus convinced her to give up such insanity. Unfortunately, Typhon managed to free himself from her control and betrayed her to fulfill his purpose to slay all of the Gods of Olympus, slaying both her and Zeus while protected by the Aegis breastplate.[5] Typhon was killed Hercules in revenge within the Continuum universe and later sealed off after Athena managed to destroy the machine linking the quantum world of Continuum.[6]

Athena's Aegis: Typhon managed to obtain the breastplate of Athena to use in his vindictive quest against Hera and the world after she became head of the Olympus Corporation[5] but was apparently not enough to protect him from being beaten to death by Hercules' Golden Mace.[6]

Promethean Battle Ax: When the titan beast bathed his weapon of choice within the Promethean Flame of Olympus, it gained a host of divine enchantments bestowing upon it great power drawn upon the Land of Shadows.

Retrieved from "https://marvel.fandom.com/wiki/Typhon_(Earth-616)?oldid=5711728"
Community content is available under CC-BY-SA unless otherwise noted.