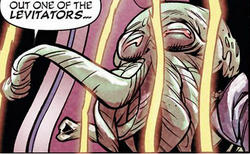 One of many personalities of the mutant Legion. While originally contained in the Qortex Complex, he was released with the others when Charles Xavier died, sending psychic shock waves across the planet. Whilst the other persona raged for control, Tyrannix followed David into the vents within his mind. However, Tyrannix under-estimated the power of his original, being beaten and becoming the first personality David reclaimed.

Since then Tyrannix has been fairly unresponsive, mostly acting as David's telepathic backpack except for rare times when David isn't carrying him.

Later, when David's mind was being ravaged by the Phoenix's Shadow, Tyrannix was the first personality to willingly fuse with him, allowing David to cast a solid blow against the creature and release several of his trapped personalities. Soon absorbing more fractured persona, they came together to create the Gestalt personality.[1]

Telepathy: He has the ability to read and communicate directly with the minds of others.

Physically speaking, Tyrannix seems to be one of the least imposing of any of David's sub-persona, being easily pacified by Ksenia Nadejda Panov and later by David, even when he had no powers to call upon.

Like this? Let us know!
Retrieved from "https://marvel.fandom.com/wiki/Tyrannix_the_Abominoid_(Legion_Personality)_(Earth-616)?oldid=6007857"
Community content is available under CC-BY-SA unless otherwise noted.