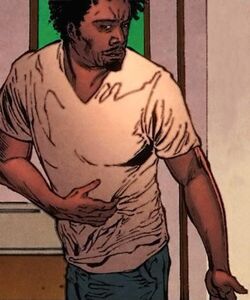 Tyree was at the top of his class in engineering in college when his mother passed away and he suffered from his first psychotic episode. Since that time, he has gone off and on his psychotropic medications, relying primarily on his sister.[1]

He was saved from Hangman by Iron Man.[2] It was through interactions with Tyree that Tony got the idea to found Imperio Techworks.[1] Although Tyree again went off his medications, Tony still pays dividends to him.[3]

Like this? Let us know!
Retrieved from "https://marvel.fandom.com/wiki/Tyree_Robinson_(Earth-616)?oldid=5518051"
Community content is available under CC-BY-SA unless otherwise noted.