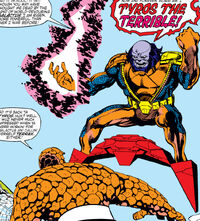 This single-occupant vehicle was built by Doctor Doom to be used by his Power Cosmic-endowed minion Tyros the Terrible. The item allowed Tyros to fly from Castle Doom in Latveria[1] to New York City, where Tyros was to engage the Fantastic Four[2] Tyros initially was reluctant on the sled, which appeared too fragile for him. However, as soon as he tested it, he found he could use it as an extension of his own body.[1]

As soon as Tyros reached New York, he confronted The Thing of the Fantastic Four. The Thing took the remainings of a sedan and clobbered Tyros with it, destroying the sled.[2]

Not to be confused with the Royal Skysled of the Inhumans as seen in Amazing Adventures Vol 2 #6.

Retrieved from "https://marvel.fandom.com/wiki/Tyros%27s_Sky-Sled?oldid=5288232"
Community content is available under CC-BY-SA unless otherwise noted.