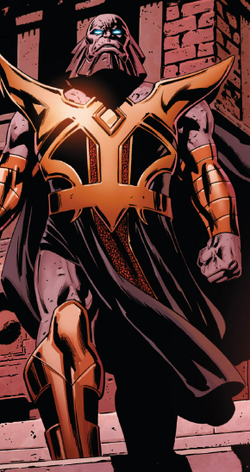 There are no constants. They could no more keep us here forever than they could remain free themselves... They will fall - all men do. And what follows will be a reckoning.

Terrax was the Herald of Galaktus in his universe.

He guided the World Eater to Earth during an Incursion, an event in which universes collide. They landed in New York City, where he encountered the Illuminati. He asked them to retreat to their home-reality and allow his master to save both their universes, but they chose to attack him. He was defeated when Black Bolt blindsided him, and was taken to Earth-616 while the Earth of his world was destroyed by his master.[1]

He was imprisoned in the Necropolis in a cell next to the Black Swan. Terrax initially rebuffed her attempts at telepathically communicating with him, but after asking him if he missed the freedom to find worlds to destroy, to which Terrax responded "more than anything", she told him that they would be of use to each other soon.[2]

When Thanos and his Generals came to the Necropolis, they considered letting Terrax and his fellow prisoner free to cause more collateral damage during their campaign to capture the infinity gems, but for his own reasons Thanos decided against it.[3]

When the Black Swan was once again re-imprisoned, after the Illuminati learned the extent of her past actions, Terrax comforted her, and re-assured her that the Illuminati would not be able to keep them imprisoned forever after gesturing towards Thanos' prison, where Corvus Glaive was returning to life.[4]

Terrax was freed by Namor, who had had a falling out with the Illuminati for destroying an alternate world during an Incursion, and joined his Cabal, in order to destroy another colliding Earth, as the Illuminati were willing to let both universes die.[5]

Rather than fight the incursions in secret, the Cabal opted to make their actions public. Terrax spoke before a Security Council meeting, making the Cabal's case, and asking the United Nations to sanction them so that they could continue to protect Earth and the universe.[6] The United Nations agreed to this, and in return, the Cabal demanded Wakanda. They razed the city-state, and claimed the ruins and the Necropolis as their base of operations.[4]

The Cabal continued to protect the universe by destroying colliding Earths, but Namor grew weary and disgusted with the Cabal's habit of engaging in wholesale slaughter of the colliding Earth's population, as opposed to simply planting the bomb and leaving.[7]

Namor, now willing to turn himself in for his crimes, devised a plan with the Illuminati to destroy the Cabal. A new Incursion was on the horizon, one in which the incursive world had been ravaged by the Sidera Maris. Namor would lead the Cabal to said world, activate the anti-matter injector without their knowledge, and leave them to die with said Earth, preventing them from escaping with the use of an A.I.M. platform capable of creating an impenetrable barrier between the two colliding Earths. As the Cabal engaged the Sidera Maris in combat, Namor set his plan in motion. However, he was betrayed by Black Panther and Black Bolt, who pushed him off the platform into the soon-to-be-destroyed Earth.[8]

As the Cabal approached the fallen Namor, who lied about his intentions, they discovered an unusual event was occuring. The Earth they were in was, in addition, in an Incursion with another universe at the same time. Unable to return to Earth-616, the Cabal made their way to the second Incursion point, and escaped from the doomed planet into the third universe, the Ultimate Universe, where they encountered the Maker.[9]

Allying with the Maker, Terrax and the Cabal set about finding a way to survive the final incursion, which was projected to take place between Earth-1610 and Earth-616, and the end of the multiverse. After securing the aid of Nick Fury and S.H.I.E.L.D., the Cabal began work on a life raft that would allow them to survive the end of the multiverse.[10]

The life raft was completed just in time, and the Cabal survived the final incursion.[11]

Terrax and the Cabal were indadvertedly freed from their raft and awoken eight years after the final incursion, on Battleworld. They killed a Thor as they emerged from the raft and began making their way across the deserted wasteland where they had awoken.[12]

While resting from a days wandering, the Cabal were accosted by the Thor Corps, the police force of God-Emperor Doom. The Cabal easily held their own against the Thors, prompting Sheriff Strange to send in the survivors of Earth-616. Eventually, Doom himself intervened. After Doom killed the Phoenix, Strange teleported away Terrax and everyone else present.[13]

Terrax spent a long time travelling across the wilderness of Battleworld, finally arriving at Doomgard just as a climactic battle to destroy Doom was underway. Seeing Galactus there, Terrax saw the chance to return to who he truly was; a herald. He offered his services to Galactus, not knowing that this Galactus was merely a puppet controlled by Franklin Richards. Franklin promptly squashed him.[14]

Terrax's current whereabouts are unknown, however, it is likely that he was restored to life when Mr. Fantastic brought back the Multiverse.

Like this? Let us know!
Retrieved from "https://marvel.fandom.com/wiki/Tyros_(Earth-13054)?oldid=5739394"
Community content is available under CC-BY-SA unless otherwise noted.