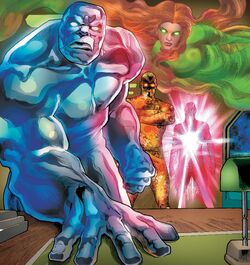 In an attempt to duplicate the creation of the Fantastic Four, these four power-hungry individuals went to great lengths to copy the accident that created the FF, even hiring the engineers responsible for creating the original shuttle to try and copy it exactly. The attempt succeeded, but the 'project' was interrupted by Bruce Banner, who discovered their ground control facility and was able to bring the shuttle down because he thought it had been exposed to the cosmic radiation by accident. Despite gaining power, the four immediately attacked Banner once they landed, believing they could have gained even more power if he hadn't interfered, but were defeated when Banner transformed into the Hulk, their new powers no match for Banner's raw strength and their lack of coordination as a team. They were defeated on this occasion, but went on to become the super-criminals known as the U-Foes.[2]

The U-Foes escaped from the Raft when Electro instituted a mass prison break.[3]

The U-Foes became a part of Norman Osborn's new Initiative as the team for the state of North Carolina,[4] proving themselves loyal to both Hood's army and Initiative.[1]

The U-Foes later play a role in the beginning of Siege. Norman Osborn sent them to fight Volstagg. The resulting clash led to Volstagg destroying Soldier Field and giving Osborn the event necessary to start his war with Asgard. They were also among the first of Norman Osborn's forces during the start of the battle. They along with Osborn and his forces were eventually defeated by a large alliance of heroes.[5]

When Hulk popped up while hiding in New York City, the U-Foes attacked him and took turns fighting him. The fight was temporarily halted when Vector accidentally sent Hulk flying to New Jersey with his telekinesis. After finding Hulk, X-Ray hit Hulk with anti-gamma rays that eventually killed him.[7]

Like this? Let us know!
Retrieved from "https://marvel.fandom.com/wiki/U-Foes_(Earth-616)?oldid=6214058"
Community content is available under CC-BY-SA unless otherwise noted.