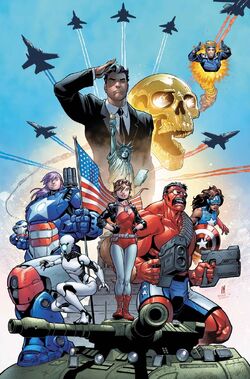 Origin
Team dedicated to protecting the United States of America from all threats, both foreign and domestic.

The U.S.Avengers originated from Avengers Idea Mechanics transition into a branch of S.H.I.E.L.D., and its rebranding as American Intelligence Mechanics. They are A.I.M.'s own team of superheroes.[1]

U.S.Avengers joined forces with the main Avengers team and the Avengers Unity Division due to a global crisis caused by a cosmic contest between two Elders of the Universe, the Grandmaster and the Challenger; a game during which the Earth was teleported away from the Solar System.[2] Most of the world's heroes were placed in stasis, including Squirrel Girl and Enigma.[3] Enigma was freed from stasis when Red Wolf was abducted and taken to the Grandmaster's Cosmic Game Room.[4] During a fight with a resurrected Hulk, Enigma's Enigma Suit was rendered inoperable, and Red Hulk was depowered.[5]

Near the conflict's end, Citizen V saw himself forced to switch off his regulator headband and use his powers to help keep a device named the World-Engine running, since it maintained the Earth's conditions and prevented the planet from crumbling. After Quicksilver's actions freed the heroes still in stasis, Squirrel joined Cannonball and many other heroes in fighting the Challenger[6] and were eventually successful in defeating him.[7] Bobby's actions with the World-Engine tentatively took off many years off his life, so he decided to dissolve the U.S.Avengers and return to his roots since he didn't know how much he had left.[8]

Retrieved from "https://marvel.fandom.com/wiki/U.S.Avengers_(Earth-616)?oldid=5551868"
Community content is available under CC-BY-SA unless otherwise noted.