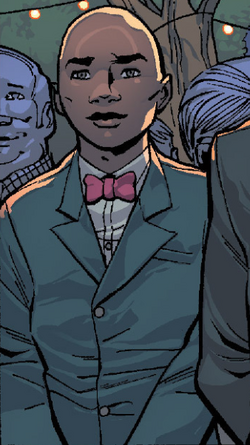 Co-worker of Peter Parker at Horizon Labs and also a child prodigy, he works at Lab 5. He would later assist Doctor Octopus in creating his city wide security system before the Spider-Island.

As well as his fellow workmates, Uatu has a prodigy intellect, being Horizon's wonderkid. Uatu is a pre-teen genius who works in Horizon Labs. He also has a talent with electronics and computers.

Like this? Let us know!
Retrieved from "https://marvel.fandom.com/wiki/Uatu_Jackson_(Earth-616)?oldid=5742297"
Community content is available under CC-BY-SA unless otherwise noted.