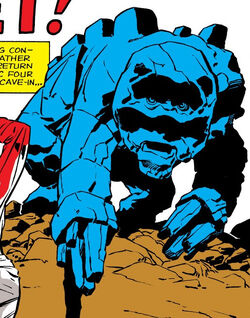 Ugu was one of many Deviant Mutates dwelling on Monster Isle who worked for the Mole Man.

When the Fantastic Four arrived on Monster Isle, the monster attacked Thing and the Invisible Girl, but was overpowered by the Thing.[2]

Ugu came with the Mole Man to see who was disturbing Monster Isle, taking control of its inhabitants.[3] The Monster continues to serve as a ward of the Mole Man to this day.[4]

Like this? Let us know!
Retrieved from "https://marvel.fandom.com/wiki/Ugu_(Earth-616)?oldid=5824943"
Community content is available under CC-BY-SA unless otherwise noted.