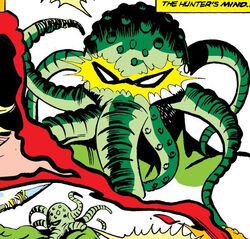 Very little is known about the history and actual motivations of Ulluxy'l. He was created, possibly before the formation of the current universe, in another dimension by the Exo-Mind, the sentient mind within the Bloodgem. Ulluxy'l was to be one of the five beings necessary to open a dimensional portal to other realms to allow the Elder Gods who had created the Bloodgem to conquer them. Ulluxy'l's fate after his creation is unknown for an undetermined length of time. [citation needed]

Ulluxy'l was next seen on the planet Earth, 8000 BC, in Northern Vanaheim, which would become Scandinavia. Ulluxy'l was observed by a tribesman, who followed him to his underground cavern, where Ulluxy'l exposed him to the energies of the Bloodgem. The tribesman was granted superhuman physical abilities, and was sent back to gather more of his tribesman, so that they might gain similar power. However, the entire tribe was gathered in Ulluxy'l's chamber, and the Bloodgem slew them all. Ulluxy'l believed that the Bloodgem had attempted to empower the tribesmen, but they were lacking the mental capacity to accept it, and so they died. The original tribesman shattered the Bloodgem with his spear. One of the fragments embedded itself in his chest, transforming him into the virtually immortal warrior, Ulysses Bloodstone[2]. The remaining fragments were scattered by the explosion.[citation needed]

Ulluxy'l attempted to regather the fragments, although they apparently eluded him for over 10,000 years. Bloodstone saw Ulluxy'l as the orchestrator of the slaughter of his tribe, and believed that he sought to use the Bloodgem to either exterminate or enslave the human race. The two apparently struggled against each other over the milennia.

In the modern era, Ulluxy'l gathered four others: Dr. Juden Bardham, the sorcerer Kaballa, Bubbles O' Day, and a dolphin named Atlan. These five formed the Conspiracy and sought to reunite the fragments of the Bloodgem. However, unbeknownst to Ulluxy'l, the other members of the Conspiracy disagreed with his plans and felt he was hindering their progress. They recruited Centurius to replace him as the new fifth member. Centurius succeeded in regaining a fourth major fragment, leaving only the one possessed by Bloodstone outside of their possession. Ulluxy'l attempted to take the fourth fragment from Centurius, but Centurius, using a weapon able to tap into the fragments power, slew Ulluxy'l.[citation needed]

It was revealed by Kaballa that Ulluxy'l was actually a mere pawn of the Exo-Mind, who appeared to be as unaware of his true role, as was Bloodstone. The Exo-Mind wished to observe the evolution of humanity through disinterested eyes. To do so, it required a host whose entire existence revolved around a single purpose. Realizing that revenge would be an ideal purpose, the Exo-Mind empowered Ulysses Bloodstone to survive for an indefinite period and serve as its host, and gave him the purpose of killing Ulluxy'l (whom Bloodstone saw as the director) and saving the world from him. The Exo-Mind allegedly created (or directed) a large number of the monsters Bloodstone fought over the years, primarily to keep him motivated to go on living. Eventually, in the modern era, the Exo-Mind decided it wished to experience death through Bloodstone, since its own life was eternal. Apparently needing a true living being to drain of its soul, the Exo-Mind influenced the members of the Conspiracy to slay Ulluxy'l and replace him with another human.[citation needed]

Uncertain. Ulluxy'l apparently possessed certain telepathic powers, enabling him to enslave others or distort their perceptions. He likely possessed either a great degree of durability or regenerative power, as it has been stated that he could not be killed except by the energy of the Bloodgem. He may or may not have possessed superhuman strength or other energy powers. It seems likely that he could be granted various powers by the Exo-Mind, which could access the limitless energies of the Hellfire Helix.

He can be killed by the energy of the Bloodgem.

Like this? Let us know!
Retrieved from "https://marvel.fandom.com/wiki/Ulluxy%27l_Kwan_Tae_Syn_(Earth-616)?oldid=5427175"
Community content is available under CC-BY-SA unless otherwise noted.