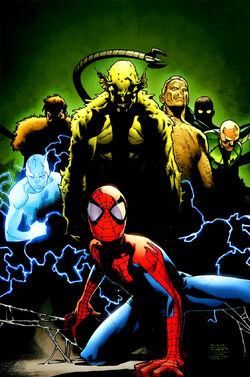 The Ultimate Six, consisting of the Sandman, Doctor Octopus, Kraven the Hunter, Electro, and Green Goblin (who tried to recruit Spider-Man through blackmail), went up against Nick Fury and the Ultimates after the villains escaped the S.H.I.E.L.D. prison they were held in after each had been defeated by Spider-Man and arrested by S.H.I.E.L.D. for illegally altering their genetic codes. Spider-Man temporarily fought alongside the Green Goblin, believing he had kidnapped Parker's Aunt May. When Captain America informed Spider-Man that she was safe in S.H.I.E.L.D custody, Spider-Man turned and helped defeat the Ultimate Six.

Later, the team was re-formed with the Vulture replacing Spider-Man. Osborn formed this version of the group to kill Spider-Man, and they succeeded, but not before losing Doc Ock (due to Osborn killing him earlier).

Sandman, Kraven the Hunter, Vulture and Electro are still incarcerated while Doctor Octopus is dead and Green Goblin escaped from S.H.I.E.L.D custody.

Like this? Let us know!
Retrieved from "https://marvel.fandom.com/wiki/Ultimate_Six_(Earth-1610)?oldid=5551881"
Community content is available under CC-BY-SA unless otherwise noted.