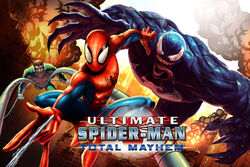 Spider-Man is first seen fighting off a group of thugs attacking a woman. The woman calls him a freak and runs off. The Triskelion is seen in flames, caused by an explosion, which unleashed several symbiotes mixed with the OZ Formula. Spider-Man faces Venom and an army of symbiotes, and is then informed by SHIELD that Norman Osborn has captured several people. After stopping Norman, Dr. Conners creates a formula to destroy any symbiotes left in the city. In the end, Spider-Man is approached by the woman, who says he is not a freak.

Like this? Let us know!
Retrieved from "https://marvel.fandom.com/wiki/Ultimate_Spider-Man:_Total_Mayhem?oldid=6133880"
Community content is available under CC-BY-SA unless otherwise noted.