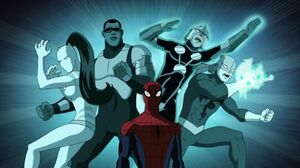 That's why he's here for, to learn about responsibility.

Aboard S.H.I.E.L.D.'s Helicarrier, Spider-Man is training against robot soldiers while Nick Fury watches him via a screen and laughs. His soon-to-be fellow teammates watch him with different reactions, while Iron Fist and Power Man believe they can make it, Nova and White Tiger think the opposite. When Spider-Man destroys all his robotic enemies, Nick Fury advises him about a "Parachute test" and throws him out of the Helicarrier. Using a web parachute, Spider-Man saves his own life.

The same morning, Peter visits Harry in hospital and leaves him some homework. The next day at Midtown, Mary Jane is gluing posters on the walls asking Spider-Man for an interview, saying that "He could be anybody".

Later, as Spider-Man, he visits S.H.I.E.L.D. and meets Doctor Curt Connors, a resident scientist who shows Spider-Man some technology based on his powers. When Peter is about to reveal a special device, agent Phil Coulson stops him, impling he distrusts Spider-Man being in S.H.I.E.L.D.. Nick Fury states that Spider-Man is there to learn about being responsible. Spidey reveals the mysterious objects, which is a special motorcycle. Spider-Man thinks it's useless, but Fury encourages him to try it. When he turns it on, he instantly loses control of it and ends up falling out of the Helicarrier. Via communicator, Fury tells Spider-Man how to use the cycle's web shooters. After saving his life, Spider-Man tests the cycle around New York. When he's about to crash against a gasoline truck, Nova flies and saves him. Back to the ground, the four heroes presents themselves.

After learning they are also part of S.H.I.E.L.D., he discusses with Agent Coulson at the HQ why he didn't want to be in the team. While leaving, Fury approaches Spider-Man and tells him why he asked him to join, that he knew he had potential to be a great hero; anyways, he quits.

While on a rooftop thinking about what he has done, Peter is attacked by the Frightful Four and easily subdued. As soon as Wizard mentions a client, Spider-Man attacks him, having faked his unconsciousness. Power Man, White Tiger, Nova and Iron Fist show up and help Spider-Man against the three villains, who they finally defeat.

Back at the Helicarrier, Spider-Man re-accepts Fury's offer, with the condition of still being a solo hero most of the time.

The next day, at Midtown High, Thompson is about to put Peter in a locker, until Power Man, in civilian clothes, shows up and locks Thompson up instead. He reveals to Peter that now he and the other heroes will be attending to Midtown along with him. When Peter asks the principal for a transfer, he finds himself with Agent Coulson, the new principal. After realizing this situation is not that bad, Peter accepts his new classmates.

Like this? Let us know!
Retrieved from "https://marvel.fandom.com/wiki/Ultimate_Spider-Man_(Animated_Series)_Season_1_2?oldid=6499342"
Community content is available under CC-BY-SA unless otherwise noted.