Episode Title
"Back in Black"

Appearing in "Back in Black"

Synopsis for "Back in Black"

Peter Parker has gotten the flu and is busy putting civilian clothes over his Spider-Man outfit when Aunt May returns to check up on him. However, he slams the door shut proclaiming he doesn't want to get her sick when a villain, Dragon Man, attacks New York. However, a web shoots straight throw it, knocking out its power source. The Black Spider then lands on top of the foe to toast in his victory. Peter watches, shocked, at home wondering if he got replaced. Black Spider's fame quickly spreads with J. Jonah Jameson exclaiming he is a real hero and Flash Thompson throwing out his Spider-Man shrine.

Nick Fury rounds up White Tiger, Iron Fist, Power Man, and Nova as Spider-Man enters sneezing which prompts White Tiger to remind him to stay clear. Nick Fury wonders who could Black Spider be and Spider-Man answers by stating its Venom but Nova, Iron Fist, and Power Man dismiss the option while White Tiger states she better not get sick as Spider-Man leaves the room to discover the mystery. Dragon Man returns to wreak havoc but is once again easily defeated by Black Spider. Spider-Man confronts him, but the Black Spider swings again prompting the web-swinger to give chase. The other hero makes a fool out of Spider-Man before leaving.

Meanwhile, Doctor Octopus watches the Black Spider on television while Norman Osborn joins him where Octopus states that it has many similarities with Venom. Norman tells him to uncover the connection and Otto states he'll run more tests with Dragon Man. Later, Sam taunts Peter about his battle with Black Spider. Harry then takes Peter into the bathroom where he reveals he is the Black Spider. Peter then figures out that Harry is seeking Norman's approval by donning the symbiote and tries to teach him that with great power comes great responsibility but Harry reflects on Norman's advice that with great power comes great rewards. Peter tries to convince Harry about the danger Venom posses, but Harry, with a changed attitude, exclaims there is none.

Harry attempts to tell Norman but he brushes him off rudely. Spider-Man spies on the Black Spider when Nick contacts him accusing him of hiding something. The web-swinger lies and gives chase to the Black Spider. However, he runs into Dragon Man, but the Black Spider once again easily defeats him. Spider-Man watches as his replacement starts attacking innocent bystanders. Spider-Man intervenes prompting Venom to fully take control.

Venom battles Spider-Man throughout the city becoming more dangerous and violent. Their battle eventually takes them into Oscorp where the hero saves Norman from Venom and they battle to the rooftop where Spider-Man smacks Venom into an electric board, shortening the symbiote out to be destroyed. Harry then comes to where Spider-Man ponders whether to reveal his secret identity but decides against it. Later, he is giving Nick Fury the update who still questions how much he is revealing. The web slinger states Venom is gone for good but a small portion of it reveals itself in Harry's ear prompting him to scream in terror. Meanwhile, Doctor Octopus sees the battle on his monitor and removes it upon hearing Norman's arrival who states he wants it and questions the look on Otto's face asking him if he knows something. Octavius responds with nothing. The next day, Spider-Man's flu has been cured, but the germs have affected his team, who chase him angrily. 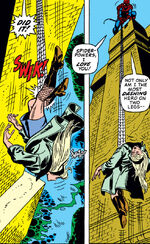 Retrieved from "https://marvel.fandom.com/wiki/Ultimate_Spider-Man_(Animated_Series)_Season_1_8?oldid=5228816"
Community content is available under CC-BY-SA unless otherwise noted.