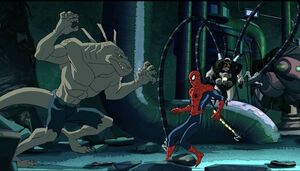 Appearing in "The Lizard"

Synopsis for "The Lizard"

The team lead by Spider-Man battle Doctor Octopus in his warehouse base. During the fight the are rescued by Nick Fury and a group of SHIELD agents who blast Doc Ock unconscious and retrieve the suitcase. Peter must rush home just in time for Aunt Many to get home. The team now live at the Parker house, leaving no space for Peter. He went to Doctor Connors' lab for some space, where he has been upgrading his web-shooters. Doc Connors had lost his arm in a previous fight with the Goblin. Doc Connors reveals that the suitcase contained genetic samples allowing for the creation of animal human hybrids. They are attacked by Octobots, but during the fight Doc Connors injects himself with the Lizard DNA allowing him to grow a large reptilian like arm. They defeat the robots, but the DNA continues to mutate transforming into the Lizard. The Lizard tracks down Doc Ock and tries to kill him, but Spider-Man intervenes, but he is slowly becoming more beast like. The Lizard and Spider-Man fight across the city, all the way to Doc Ock's old lab. Spider-Man uses the equipment to work on a cure as the team arrive to battle the Lizard. Spider-Man injects him with the cure and Doc Connors returns to normal again minus his arm. The team then had to rush home for dinner which had been prepared by Sam.

Retrieved from "https://marvel.fandom.com/wiki/Ultimate_Spider-Man_(Animated_Series)_Season_2_1?oldid=5719168"
Community content is available under CC-BY-SA unless otherwise noted.