"Journey of the Iron Fist" 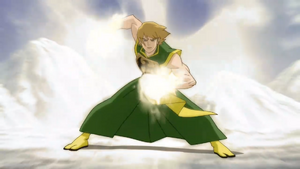 No outside infidel may trespass on the sacred ground of K'un-Lun!

Appearing in "Journey of the Iron Fist"

Synopsis for "Journey of the Iron Fist"

Spider-Man was being trained by Iron Fist on the Brooklyn Bridge in to improve his fighting techniques without the aid of his Web-Shooters. Iron Fist best Spider-Man in every attack, until a mist covers the bridge and Iron Fist saves Spider-Man from an incoming dagger, which was so fast it almost didn't set off his spider-sense. They battle a ninja, but when Spider-Man retrieves his Web-shooters he attachers the assassin to a nearby truck and is dragged away. An elderly monk appeared and Danny says thank you and goodbye and left in a limousine. Spider-Man confused followed his friend to an airport as see Danny get on to a Rand Industries jet. It is then he realized that Danny's family was rich, there were signs but he had just ignored them. Spider-Man hitches a lift and ends up in the hidden city of K'un-Lun. He is attacked by the Scorpion, a fellow student of K'un L'un monastery, who threatens the outsider, but Danny stops the fight. They entered the monastery where Danny tells Spider-Man of his origin, of defeating Shou-Lao and gaining the Iron Fist. He only went out into the world for a year to say his goodbyes as he was to be the new ruler of K'un-Lun. But he used that time to join the team to help battle for good. He now must take part in a test to prove his worthiness, but before it could begin, he is poisoned, which blinds him. Danny chooses Spider-Man as his proxy to take part in the test for him. The test are created to test the warriors skill as well as spirit after a few near misses they reach the end. The Scorpion falls victim to the last trap believing himself the victor. Spider-Man rescues him but the Scorpion betrays him and seizes the throne for himself. But he had really lost and Spider-Man is claimed the victor with Danny's position as leader assured. The Scorpion attacks but is easily bested by Danny in battle. Danny now gains the powers of two Iron Fist's, as he says goodbye to Spider-Man the Master allows Danny to return with his friend, allowing him another year in the outside world. Spider-Man tries to give the Master a fist bump as gratitude but is thrown out of the temple.

Retrieved from "https://marvel.fandom.com/wiki/Ultimate_Spider-Man_(Animated_Series)_Season_2_13?oldid=5719198"
Community content is available under CC-BY-SA unless otherwise noted.