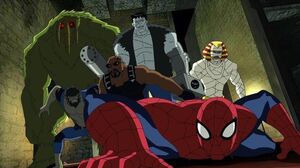 Enter if you wish but do not dare to hope, hope has no place in these halls!

Appearing in "The Howling Commandos"

Synopsis for "The Howling Commandos"

After being introduced to the new team they are interrupted by Dracula along with Spider-Man's mesmerized team when they arrive on the Helicarrier to get the Tekhamentep's Ankh. Spider-Man tries to fight Dracula when he tries to grab the Ankh as Spider-Man is assisted by the Frankenstein's Monster. Dracula succeeds in making off with Tekhamentep's Ankh as Werewolf by Night states that Dracula will activate Tekhamentep's Ankh at sunrise. Peter still in costume and the commandos go to Aunt May's house to check if she is alright, setting up vampires traps and N'Kantu casts some protection spells. Using the Monster Truck, Spider-Man, Blade, and the Howling Commandos head to Transylvania to confront Dracula. Spider-Man, Blade, and the Howling Commandos enter Dracula's castle where Dracula unleashes his minions on them. They release the Man-Thing who takes out all the shadow vampires at in one go. When they confront Dracula, the Howling Commandos fight to keep Dracula from activating the Ankh while Spider-Man frees his team. As Dracula prepares to join the pieces of Tekhamentep's Ankh, Spider-Man snatches the Ankh out of Dracula's hands with the help of Frankenstein's Monster as the sun rises. This causes Dracula to retreat, N'Kantu took Tekhamentep's Anhk for himself which he uses to restore his body and teleport to Manhattan in giant size to deal with Nick Fury (who N'Kantu claimed to have the Howling Commandos as part of S.H.I.E.L.D.'s "collection of freaks") where N'Kantu engages the S.H.I.E.L.D. Helicarrier. With help from a giant-sized Man-Thing, Spider-Man uses Blade's Sword to cut Tekhamentep's Anhk from around N'Kantu's neck which regresses N'Kantu back to his mummy form. Spider-Man thanks Blade and the Howling Commandos for their help and tells the team the only thing they are missing is an Invisible Man, but at that moment his pants are pulled down to revealed Max, the "Invisible Man" who had been guarding Aunt May's House.

Retrieved from "https://marvel.fandom.com/wiki/Ultimate_Spider-Man_(Animated_Series)_Season_2_22?oldid=5230612"
Community content is available under CC-BY-SA unless otherwise noted.