"Halloween Night at the Museum" 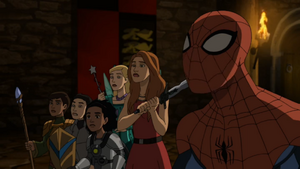 Appearing in "Halloween Night at the Museum"

Synopsis for "Halloween Night at the Museum"

Morgan le Fay is accidentally freed from her armor imprisonment by Jessie Prescott during the Ross family visit to the American Museum of Natural History as she planned to claim the sword and cause the end of the world. Spider-Man comes to their aid as Morgan brings the exhibits to life while placing a pumpkin on a security guard turning him into Jack O'Lantern. After the battle with the exhibits, Morgan made another attempt at the sword where she transformed Mrs. Kipling into a dragon. Morgan then attacked Jessie as she used the sword to combat Morgan. After blasting the sword out of Jessie's hand, Morgan grabbd the sword in order to blot out the sun and become the true heir of Camelot. After Ravi regained control of Mrs. Kipling, Jessie placed the sword back onto the armor as Morgan le Fay is re-imprisoned.

Retrieved from "https://marvel.fandom.com/wiki/Ultimate_Spider-Man_(Animated_Series)_Season_3_14?oldid=5231877"
Community content is available under CC-BY-SA unless otherwise noted.