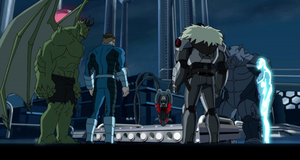 Appearing in "The New Sinister 6, Part 1"

Synopsis for "The New Sinister 6, Part 1"

After defeating Shriek, Spider-Man joins Flash Thompson, Amadeus Cho, Miles Morales, and Ben Reilly for Aunt May's birthday party. Things get worse when Doctor Octopus completes his Sinister Six upon assembling Kraven the Hunter, Ultimate Green Goblin, Rhino, Hydro-Man, and Electro where they attack the Triskelion. Even when most of the Sinister Six is defeated by the S.H.I.E.L.D. Academy students, Spider-Man is caught off guard when it turns out that there is a seventh member of Doctor Octopus' group that Spider-Man least suspects.

Like this? Let us know!
Retrieved from "https://marvel.fandom.com/wiki/Ultimate_Spider-Man_(Animated_Series)_Season_4_10?oldid=6499411"
Community content is available under CC-BY-SA unless otherwise noted.