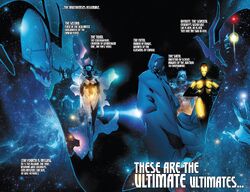 Base of Operations
Next Place; formerly the Far Shore
Affiliations

The Ultimate Ultimates is a group formed by all the incarnations of the Multiverse. Believed to be dead for being replaced by a new iteration during the renewal cycles the Multiverse passed through during its existence, each of them waited in the Far Shore for Eternity's call to fight against the First Firmament, who sought to reclaim his place as everything that is. After chaining the First Firmament, the Ultimate Ultimates took him to the Next Place in the hopes of healing their kin.[1]

Retrieved from "https://marvel.fandom.com/wiki/Ultimates_(Multiverse)?oldid=5551895"
Community content is available under CC-BY-SA unless otherwise noted.