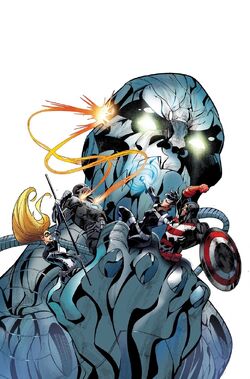 Alien robot. It was designed to kill planets.

Ultimo was a robotic construct which was developed several thousand years ago on an unknown world. At some point in the past (probably in the early-mid 19th century) Ultimo attacked the planet Rajak and wiped it clean of life. A group of surviving Rajaks were off-planet during the attack, and hunted Ultimo down for what he had done. However, the giant robot proved too powerful for the Rajaki, and it was Ultimo who ended up pursuing them. The Rajaki led Ultimo into a meteor shower near Earth; the meteors knocked both Ultimo and the Rajaki ship to Earth. Ultimo crashed in China, and the Rajaki ship in what would become Washington State.[1]

The Mandarin eventually discovered Ultimo and altered his programming to suit his needs. He claimed that Ultimo was his own creation; the only thing, however, that the Mandarin actually created (besides the different programming) was an artificial blue skin for the robot. Mandarin utilized Ultimo numerous times against Iron Man,[2] including once in the nation's capital, Washington, D.C. During that battle, Iron Man trapped Ultimo beneath the Earth's crust. As a result, the robot meandered through the planet’s magma absorbing an enormous amount of energy. Years later, while Iron Man was in battle with a rock-like creature dubbed the Earthmover near Mt. Acheron in California, Ultimo re-emerged sans his blue skin, significantly taller and much more powerful. He vaporized the Earthmover and destroyed a remote unit Iron Man, and then went about destroying anything in his path.[3]

Jim Rhodes cobbled together several of Tony Stark’s closest confidantes to wear old suits of Iron Man armor in order to meet the Ultimo threat. This group was dubbed “The Iron Legion” and proved successful only in slowing down the behemoth robot. It took Tony Stark in a new suit of Iron Man armor to figure out how to stop it; he planted a device on Ultimo’s back which caused lightning to strike it, thereby shutting down all of its systems.[4]

Ultimo remained in the possession of Stark Enterprises, and then eventually the new Stark-Fujikawa. Tony Stark was not part of the latter company and hence had no say (nor knowledge) of that company’s plan to use Ultimo as a floating power source. He was quite dismayed when he discovered what had become of the dangerous robot. However, his protests were met with deaf ears by his cousin Morgan Stark, now part of Stark-Fujikawa. Sometime later, two entities known as Sapper and Golden-Blade attacked the Stark-Fujikawa craft which laid atop Ultimo, attempting to siphon energy from it. Their attack unknowingly reactivated Ultimo, even as Sapper – who turned out to be the sole-surviving Rajaki – realized what the Stark-Fujikawa ship really was.[5]

Once awakened, Ultimo probed Sapper’s mind, learned who he was, and then continued to pursue that which he originally did before he crashed to Earth – the Rajaki starship. The major problem was that the city of Spokane, Washington laid right in Ultimo’s path. Eventually, Iron Man placed a systems tap on Ultimo which permitted him to access the robot’s internal programming. He ordered Ultimo to stop and shut down, and after a few unsuccessful tries, Ultimo finally ceased his advance and deactivated. SHIELD arrived and began to disassemble the giant android, after Goldenblade and Sapper had siphoned enough energy from the fallen destroyer to re-power their ship - "accidentally" frying his neural network in the process.[6]

Ultimo was separated out into several parts - His body, his brain and his software - and studied by, among others, the Human Engineering Life Laboratories who attempted to weaponize the giant android. They discovered his basic nature is liquid rather than solid, and proceeded to infect human subjects with him, temporarily turning them into miniature Ultimos. Having destroyed two components of the giant, War Machine (James Rhodes) caught up with Morgan Stark who, in an attempt to get out from under the shadow of his cousin, imbibed the liquid form of Ultimo to become a new giant destroyer. His will proved too weak, however (or insufficiently evil) and with the help of Norman Osborn of all people, War Machine managed to neutralize the now-liquid, shapeless and mentally blank robot. Suzi Endo, the Cybermancer, was charged with teaching the mindless, but functional Ultimo a new way to live.[7]

Years later, Ultimo resurfaced in Lingares after having been in slumber in its caverns. He was awakened by M.O.D.O.K., who had the intention to control the giant robot. When he failed to contain Ultimo, M.O.D.O.K. created an army of Deathloks out of local countrymen. However, they turned against him due to the ongoing robot revolution, but still intended to confront Ultimo, albeit to destroy him and prevent M.O.D.O.K. from getting his hands on him.[8] When Force Works arrived at Lingares to investigate the situation and stop the Deathloks,[9] M.O.D.O.K. offered his help to stop Ultimo,[10] and provided War Machine with his Subatomic Outgoing Broad-Isotope Gun, a powerful weapon capable of damaging Ultimo. When Force Works engaged Ultimo again, War Machine used the Isotope Gun to blow off Ultimo's head. The robot's decapitated body was then usurped by M.O.D.O.K., who rechristened himself UltiM.O.D.O.K., but was afterwards defeated by Force Works and the Deathloks.[8]

Superhuman Stamina: Virtually unlimited endurance due to being a near tireless machine.

Superhuman Speed: He is deceptively fast, Despite his bulk he's capable to walk/run at about 100 miles per hour.

Invulnerability: Despite whatever is thrown at him he has absolutely limitless durability.

Energy Absorption: He can absorb and store immense amounts of heat energy into his body for a number of impressive feats as well as convert it for other purposes.

Reactive Adaptation: Ultimo has also shown he can adapt his defenses; for instance, while he once was deactivated by a lightning bolt, this later proved ineffective.

Self Restoration: He's also capable of repairing himself even when deactivated and completely disassembled. In the likely event her were to be damaged or rendered disabled, Ultimo is more than capable at remaking itself. Even if he's broken beyond repair or his parts separated and scattered around the globe, he will literally pull himself back together no matter how far apart his pieces are.

Metal Morphing: In being remade as a polymorphametal infectious entity through the Ultimo Virus, the eponymously named robot gained a host of new and deadly abilities that make it so much more lethal than it ever was as a fully functioning automaton. Granting powers and abilities akin to the Technarchy or Phalanx species as a result of the core processing of its A.I. mind being broken down into parts.

Radiation: When hit by a nuclear bomb, the radiation made Ultimo temporarily vulnerable. Based on the bomb's radioactive signature, M.O.D.O.K. designed the Subatomic Outgoing Broad-Isotope Gun, a device that, with enough power, was capable of beheading the robot.[8]

Ultimo is capable of traveling anywhere under his own power, including interstellar flight.

Like this? Let us know!
Retrieved from "https://marvel.fandom.com/wiki/Ultimo_(Earth-616)?oldid=6432798"
Community content is available under CC-BY-SA unless otherwise noted.