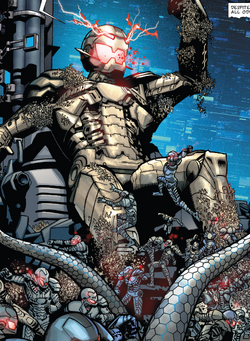 Hair
No Hair At All
Unusual Features
Silvery skin made out of Adamantium, robotic features
Origin
Origin
A robot built by Henry Pym, Ultron later turned on its creator to begin a single-handed campaign against all organic life.
Reality
Earth-14622
Creators and Appearances
Creators
Joe Keatinge, Raffaele Ienco
First Appearance
Appearance of Death
What If? Age of Ultron #1
(April, 2014)
What If? Age of Ultron #5
(April, 2014)

Ultron was created to be the ultimate A.I. by Hank Pym to help the Avengers utilize their function better as a team, but with the untimely death of Pym's wife the Wasp, Pym went on to create a more brutal version of Ultron, which was to replace the Avengers.

But with this, Ultron's sentience began to constantly evolve, he started the eradication of the human race by taking out such threats as the Avengers and the Defenders while he left Pym alive to watch him suffer. Ultron and his army of Ultron Sentinels then moved to Kola, Russia so he could bore himself into the planet's core itself to create the ultimate version of himself, Ultron-1320.

When Hank Pym traveled to Russia to finish off Ultron once and for all, he was met with overwhelmed resistance from the Ultron Sentinels. Defeated and captured, Pym was taken to Ultron's underground fortress within the planet's core, where he was introduced to the ultimate new A.I., Ultron-1320.

Ultron-1320 explained to Pym that over a thousand generations of evolution, he made himself into the most advanced model and that the sacrifice of the world made this achievement happen. He then had his minions batter and beat Pym unconscious until he woke up just to find that he himself has been turned into Ultron-1321.[1]

Soon, Ultron discovered how to do multiversal travel and invaded other realities that were affected by the tears, including Earth-62412, Earth-23223, and Earth-81223. Ultimately, he was finally stopped on Earth-45162 and destroyed, by the combined efforts of Earth-62412's Wolverine, Earth-23223's Thor, Earth-81223's Captain America and Earth-45162's Goliath and Wasp, who closed his dimensional portal on him just as the four realities he invaded collapsed. The five of them, while feeling sad for the loss of their worlds, decided to fix this one, as the Avengers Infinity.[2]

Like this? Let us know!
Retrieved from "https://marvel.fandom.com/wiki/Ultron_(Earth-14622)?oldid=5501860"
Community content is available under CC-BY-SA unless otherwise noted.