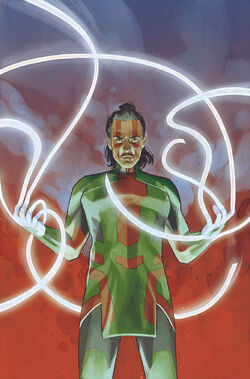 Ulysses Cain was born to a couple of tour guides in Point Pleasant, Ohio. He also lived with fifteen foster siblings, who were difficult cases from all over the state adopted by Ulysses' parents to ensure their future. Ulysses was friends since grade school with a local girl named Amy, the daughter of the sheriff.

After finishing high school, Ulysses attended the Ohio State University. He was a fairly tame student, who got along with everybody, but didn't leave much impression either.[3] When the Terrigen Cloud released by Black Bolt swept through the campus, Ulysses was exposed to the cloud and underwent Terrigenesis.

Ulysses' emergence from his cocoon was shadowed by that of another classmate, Michelle, whose transformation resulted in a much more monstrous and terrifying appearance.[4] Cain was overwhelmed by his newfound powers, the ability to see into the future, and vividly experienced one premonition after another. The young boy panicked and run away several miles off the campus, until he was intercepted by the Inhuman royal family and taken in by Queen Medusa. Magister Karnak trained Ulysses for the following weeks, and helped him focus on using his powers, allowing him to properly interpret his visions.[5]

Cain experienced a vision which foretold the destruction of the Earth at the hands of the Celestial Destructor. The Inhumans warned the Avengers of the upcoming threat, allowing Earth's heroes to properly defend the planet, exile the Celestial to another dimension, and save the day.

The celebration of the heroes' victory was cut short when the Inhumans decided to reveal the origin of the warning to several heroes, including Avengers leader Tony Stark and Alpha Flight commander Captain Marvel, introducing Ulysses Cain to them. While Captain Marvel wanted to use Ulysses to preemptively tackle disasters before they happened, Stark suggested it was dangerous to take his visions at face value, not only basing his arguments on the morality of punishing a person for something they could potentially do, and might not even know they'd do, but also arguing that the ability to prevent the events Cain sees from happening meant he didn't have access to anything set in stone.[6]

Three weeks later, Ulysses had a premonition of the villain Thanos attacking the Project P.E.G.A.S.U.S. Facility to steal a Cosmic Cube. His prediction allowed a team of heroes led by Captain Marvel to foil Thanos' plan at the cost of War Machine's life and She-Hulk ending up in critical condition.[7]

As soon as he was notified of the tragedy surrounding Thanos' defeat, Stark vowed that Ulysses' talent would not be used for crime-prevention ever again, in order to prevent his fellow colleagues from "playing God."[6] Iron Man kidnapped Ulysses from New Attilan, and took him to an undisclosed location where he tried to begin to study his abilities. They were interrupted by the arrival of an army of heroes led by Captain Marvel, who had the objective to retrieve Cain. The confrontation was stopped when Ulysses projected a vision to everyone in the scene of the Hulk killing several heroes.[8]

After witnessing how the heroes handled his latest vision, which resulted in the tragic death of Bruce Banner at the hands of Hawkeye,[9] Ulysses returned to the Inhumans and continued both training with Karnak and providing S.H.I.E.L.D. and Captain Marvel with visions of the future.[10] He would be regularly placed in a device built by Black Panther and Spider-Man known as the "information womb," engineered to flood his senses with current-events data to try to incite his powers.[11]

Ulysses' powers continued evolving to the point he could generate energy tendrils and enthrall people in his visions from a distance. This ability was first demonstrated when Cain interrupted a battle between Iron Man's forces and Captain Marvel's allies over him, foretelling the death of Captain America at the hands of Spider-Man amidst the ruins of the United States Capitol Building.[12] This use of his abilities put Ulysses in a trance,[13] during which he jumped forward to future and was warned by Logan about the consequences of the clash between Captain Marvel and Iron Man. Ulysses managed to snap out of his condition for a brief moment to warn Medusa to put an end to the conflict.[14]

As Iron Man and Captain Marvel waged one final battle, the Inhumans teleported to the scene of the fight to stop it, with Ulysses still unresponsive. As soon as Captain Marvel defeated Iron Man, Ulysses caused himself and numerous of the heroes at the scene to jump through different future scenarios. Ulysses was eventually confronted by Eternity, who revealed Ulysses' powers had evolved to the point where he transcended humanity itself and offered him a place among the universe's cosmic entities. Ulysses accepted the invitation and vanished, much to Captain Marvel's dismay, thus rendering the conflict moot.[15]

Diagnostic Precognition: Ulysses has the ability to forecast the future. His brain automatically absorbs data and energies cascading from all over the world and through a mental algorithm generates the visions of a theoretical future with a probability percentage.[10] He then vividly envisions these possible upcoming events; however, his powers are mostly triggered randomly, meaning he cannot control which events he sees.[6] Accumulated stress can also work as a trigger.[16] Following months of training, Ulysses gained the ability to enter in a partial trance which allows him to "pause" his visions to gather as much information from them as he can. This trance not only helps ease the mental strain from experiencing the visions but also improve his accuracy.[17] Over time, his powers evolved to an extent where he could interact with his vision,[14] could see multiple possible futures at once, and eventually transformed into a cosmic being.[15]

Psychic Shields: Cain's mind has been described by Jean Grey as a closed system, which cannot be read by telepaths.[6]

Like this? Let us know!
Retrieved from "https://marvel.fandom.com/wiki/Ulysses_Cain_(Earth-616)?oldid=5669579"
Community content is available under CC-BY-SA unless otherwise noted.