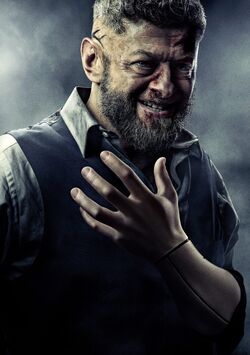 Cuttlefish! Deep sea fish. They make lights, disco lights *WHOMP, WHOMP, WHOMP* to hypnotize their prey, and then WHOOM! I saw a documentary, it was terrifying. So if you're going to fuddle with my brain, and make me see a giant cuttlefish, then I know you don't do business. And I know you're not in charge. And I only deal with the man in charge!

Ulysses Klaue was a black market arms dealer, operating from a scrapyard on the coast of Africa, and an old acquaintance of Tony Stark.[1] He most notably managed to infiltrate the secluded nation of Wakanda and stole a quarter ton of Vibranium. During his escape, Klaue caused an explosion in the frontier that cost the lives of the parents of the Wakandan W'Kabi.[2] At one point, Klaue was hired to kill Wakanda's king T'Chaka at the Bilderberg Conference in the case he refused to negotiate Wakanda's resources, but failed.

Roughly thirty years later, Ultron tracked down Klaue when he came in search of Vibranium. After transferring billions of dollars to Klaue's account, Klaue took note of Ultron quoting Stark and realized he was a creation of Stark. Ultron took offense and accidentally amputated Klaue's left arm in an angry outburst, then self-consciously apologized. When the Avengers arrived on scene, Klaue ordered his men to open fire on both sides as he made his escape.[1]

Klaue's severed arm was later replaced with a highly advanced prothesis equipped with a sonic cannon derived from Wakandan mining technology. He started working with the mercenary Killmonger to find and steal Vibranium. After stealing a Wakandan warhammer from the Museum of Great Britain, Klaue arranged a meeting with undercover CIA operative Everett Ross at the Jagalchi Market Casino in South Korea to sell him the piece of Vibranium. The exchange was interrupted when a fight erupted between Klaue's men and the Wakandan forces led by King T'Challa that had infiltrated the casino to secure the Vibranium and apprehend Klaue once and for all.

Klaue and his men managed to escape on vehicles, but they were pursued. T'Challa, donning his Black Panther suit, caught up with Klaue and caused his car to crash. He stripped Ulysses from his prosthetic arm and prepared to kill him, but was stopped by his allies, mostly because he was being observed and recorded by bystanders. Klaue was placed under custody and was interrogated by Ross, to whom he exposed Wakanda as a rich highly-advanced civilization which constrasted their façade as a poor third-world country. The interrogation was then attacked by Killmonger, and Klaue was freed.

Killmonger, Klaue and their associates arrived at a junkyard and prepared to escape by plane. In a turn of events, Killmonger turned against Klaue in order to bring him to Wakanda as a prisoner to gain access to the country. Klaue held Killmonger's girlfriend Linda at gunpoint, but Killmonger shot at her. Klaue tried to escape and find cover, but was chased down by Killmonger, injured, and subsequently killed. Killmonger then brought Klaue's body to Wakanda, and gained approval from the locals since he was bringing the body of an enemy of the state.[2]

Klaue has suffered the amputation of his lower left arm.

Prosthetic Arm: After the loss of much of his left arm, Ulysses Klaue equipped himself with a high-tech prothetic arm mimicking a normal human one in both form and function. Packed with Vibranium technology, the prosthesis is stronger than a normal human equivalent and can split open to deploy a powerful vibration cannon.[2]

Beretta Px4 Klaue carries a Beretta Px4, presumably in 9mm, as his sidearm of choice.

Vibration Cannon: The energy weapon embedded within Klaue's prosthetic arm is a multi-function armament, and when fully deployed can unleash enough concussive power to blow a Vibranium-shielded car to pieces. Without deploying the full cannon Klaue can still apply its vibration power through the shell of the artificial hand itself to induce vibrations in solid objects the arm comes into contact with. This allows for a more controlled use of force avoiding the wholesale destruction of the cannon, and is capable of shattering high durability safety glass.[2]

Like this? Let us know!
Retrieved from "https://marvel.fandom.com/wiki/Ulysses_Klaue_(Earth-199999)?oldid=6074711"
Community content is available under CC-BY-SA unless otherwise noted.