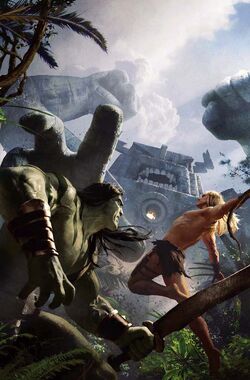 Umbu the Unliving was a robot left by the Sagittarians in the Savage Land. He was activated by the Swamp Men, fought Ka-Zar and the Hulk and was soon defeated by Bruce Banner.[1]

He was later resurrected by The Designer in order to bring about the destruction of the world outside the savage lands. The World Destroyer was placed in its heart but Skaar removed it, which ultimately shut down Umbu since his main core had already been destroyed by Banner, rendering him unusable. [2]

Like this? Let us know!
Retrieved from "https://marvel.fandom.com/wiki/Umbu_(Earth-616)?oldid=5466469"
Community content is available under CC-BY-SA unless otherwise noted.