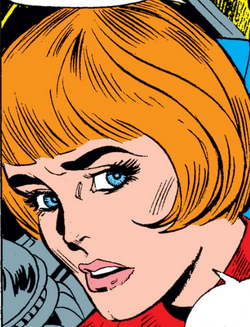 Una was the lover of Mar-Vell and served aboard the same ship as he, the Helion under the command of Yon Rogg, when they were sent on a mission to Earth by the Supreme Intelligence.[1]

When Mar-Vell was about to be executed on Earth as ordered by Ronan the Accuser, Yon-Rogg's firing squad was attacked by a contingent of Aakon warriors. In the melee, Una was fatally wounded by a stray shot by an Aakon. Mar-Vell escaped on an Earth missile, and laid Una's corpse to rest on an asteroid.[2]

She was revived by an alien parasite, attacking Carol Danvers at Cape Canaveral. In the ensuing confrontation, Captain Marvel was forced to kill her to drive the creature from her body.[3]

Like this? Let us know!
Retrieved from "https://marvel.fandom.com/wiki/Una_(Earth-616)?oldid=5619115"
Community content is available under CC-BY-SA unless otherwise noted.