Professor Xavier is a jerk!

Appearing in "Professor Xavier Is a Jerk!"

Synopsis for "Professor Xavier Is a Jerk!" 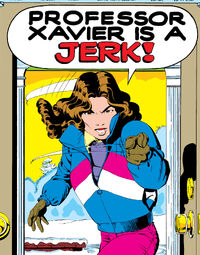 Kitty Pryde is upset that Professor Xavier has demoted her from the X-Men to train alongside the New Mutants,[1] a move that she feels is unfair since she believes that she is more skilled than the new students and that she has proven herself as an X-Man. As she rants to her friend, Illyana Rasputin, who tells Kitty that she is tired of listening to her complain, they realize that they are running late for their dance class with Stevie Hunter. Kitty and Illyana race off to their class unaware that Lockheed had been watching them from inside the mansion. At Stevie Hunter's dance studio, Kitty is still fuming over being demoted from the X-Men, and Hunter advises her to fight for her right to stay with the team.

In the mansion, Logan is preparing to go on vacation to the Canadian Rockies.[2] He discusses Kitty's removal from the team with Kurt Wagner. Both men conclude that, although Kitty has been an asset to the group, she is also at risk when fighting alongside them.

Down below, in the Danger Room, Lilandra runs Xavier through some exercises to help him gain the ability to walk after being given a new, cloned body.[1]. He is frustrated at his mind's failure overcome the mental barrier preventing him from walking. Lilandra discusses her plans to leave Earth with the Starjammers to return to the Shi'ar Empire and asks Charles to join her, but he hesitates as he feels his responsibilities keep him on Earth. Outside the mansion, on the eastern part of the estate, Ororo Munroe encounters a sudden storm that she cannot control, and she feels cold for a brief period. But soon, the storm passes.

Nightcrawler visits his girlfriend Amanda Sefton at her apartment in Manhattan.

Back at the mansion, Kitty detects a possible intruder and goes to investigate. She finds Lockheed in the maintenance tunnel, beneath the mansion. Suddenly, they are attacked by Sidrian Hunters who have remained in the mansion since their previous attack, months ago.[3] Colossus arrives, and together they defeat the Sidri. As a result of Kitty's maturity in handling the attack, Xavier agrees to let her rejoin the X-Men on a provisional basis.

Before travelling to Alaska, Scott Summers makes a stop at Shark Bay, Florida to visit with Lee Forester. He explains to Lee his recent adventures with the X-Men and his plan to visit his grandparents in Alaska. Upon his arrival in Anchorage, Scott meets with his father (Christopher Summers) and brother (Alexander Summers) where they plan to hire a plane to take them to Scott's grandparents. However, when they meet the pilot, Madelyne Pryor, they are shocked at her striking resemblance to Jean Grey.