Callisto... I lead the X-Men. The challenge, the duel - your life - are mine!

Appearing in "Dancin' in the Dark"

Synopsis for "Dancin' in the Dark"

Scott Summers and Madelyne Pryor are on their first date together, alone at a chalet in Reindeer Falls, Alaska. Summers shows a picture of Jean Grey to Pryor, revealing to her the striking resemblance she has with his now dead girlfriend. Pryor is taken aback by the revelation, but still wants to pursue a relationship with Summers and they continue enjoying the evening together. In the morning, Pryor playfully reaches for Summers' Ruby-Quartz Sunglasses to shade the sun from her eyes when he reacts violently, pushing her away. Summers reveals his mutant powers to her and explains that he cannot control it without the glasses. She is not put off by the revelation and wants to continue seeing him.

Storm, Nightcrawler, and Colossus have been capture by the Morlocks[1] while Callisto intends to continue with her marriage to the kidnapped Warren Worthington. The X-Men escape their bonds and Nightcrawler captures Callisto and threatens to kill her if they don't allow them to leave. In turn, Plague touches Storm causing her to fall ill and threatens to afflict her with a fatal illness if the X-Men don't surrender. In the end, Nightcrawler yields since he never really intended to kill Callisto. Meanwhile, Caliban is caring for Kitty Pryde, who was also touched by Plague.[1] Kitty asks Caliban to help the X-Men, and promises to stay with him if he does. Caliban brings Kitty to Callisto, begging her to save the girl, Callisto refuses. Caliban tells the X-Men that the only way to overrule Callisto would be to defeat her in trial by combat. 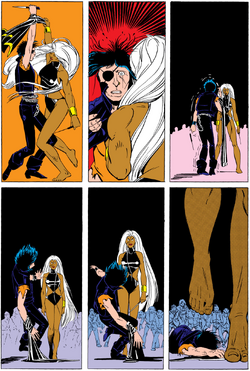 Nightcrawler immediately challenges Callsito, but Storm insists that since she leads the X-Men it should be her to issue the challenge, despite being weakened by Plague. Callisto accepts Storm's challenge, and warns her that she cannot use her powers during the duel. The pair fight fiercely, each armed with a knife. Eventually, Storm gets the upper hand and stabs Callisto in the heart, causing her to collapse. Storm releases Worthington from his bonds and announces to the Morlocks that she now leads them, having defeated their previous leader in combat. Callisto's death is prevented only by the timely intervention of the Morlocks' Healer.

Mystique experiences a dream where she is being hunted by horsemen in 18th century England. She falls and breaks her ankle and is eventually captured by the hunters' hounds. Jason Wyngarde pulls the dogs off and allows Lady Jean Grey to slash her throat. At this point, Mystique wakes from her nightmare and realizes that her ankle is sore in reality. She joins Destiny in their kitchen for coffee where the latter reveals that some force is preventing her from seeing certain future timelines. Suddenly she realizes that there is a timeline where Rogue is in danger; Mystique immediately races to Rogue's room to find it empty. Rogue is on a bus, leaving Washington, D.C., unsure why she is leaving home.

Retrieved from "https://marvel.fandom.com/wiki/Uncanny_X-Men_Vol_1_170?oldid=6538848"
Community content is available under CC-BY-SA unless otherwise noted.