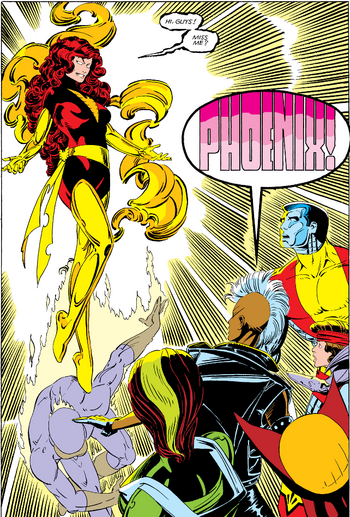 The X-Men are at Xavier's School for Gifted Youngsters chopping down a dying tree when suddenly a large firebird appears in the sky above them, and Cyclops falls from the fiery image. Rogue catches him, and Storm directs Nightcrawler to take him to the infirmary, but he belays that concerned that Phoenix has returned from the dead.[1] Professor X summons the team to his study where he uses Cerebro to attempt to verify Summers' fears, but is knocked out by electrical feedback from the mutant detector. Nightcrawler teleports him to the infirmary while Kitty inspects Cerebro, and finds that all the safety interlocks have been disengaged and the settings reversed which caused the professor's power to be reflected back at him, which would have to have been initiated by the professor himself. As the group discusses how and why this could happen, Dark Phoenix rises out of Cyclops causing him to collapse. The team attacks her but are easily defeated by her powers, except for Wolverine who sees no point in an attack at this time. Phoenix leaves to perform some 'errands', promising to return to finish what she started.

After the team recovers, they call the Starjammers on their communication system; Corsair answers and tells them that Phoenix has attacked their ship and that the other Starjammers have been killed. Soon, there is an explosion on the screen and the connection terminates. Next they contact the Avengers, but their conversation with Captain America is cut short by another explosion. They patch into a military satellite to confirm that Manhattan has been destroyed.

In the infirmary, Professor X is stable but still unconscious, while Cyclops also remains unconscious but without any physical damage. However, Cyclops' disembodied consciousness observes the X-Men attending to his body; unable to communicate with his teammates. In this state, Summers sees a vision of his mother, but she disappears before he can reach her. Cyclops wakes in his body and realizes that they have fallen victim to their foe Mastermind. He attempts to warn the rest of the team, but as they are still under the influence of Mastermind, see him as Dark Phoenix and attack him accordingly. Storm uses her powers to control the wind to bring Cyclops close where Colossus can take a swing at him, cracking a couple of his ribs. Cyclops manages to turn the tables enough to make his escape, but Kitty tackles him by phasing through a wall when he throws them both off the balcony causing her to instinctively phase them both through the floor and down into the Danger Room. Nightcrawler teleports down to the control booth of the Danger Room to set it against Cyclops, but Scott has rigged the panel to shock Nightcrawler senseless and then he puts Kitty to sleep with a nerve pinch. The remaining X-Men confront him in the Danger Room, but he uses a remote control to change the environment to imitate the Savage Land and hides in the jungle while they are distracted.

Elsewhere, Madelyne Pryor, dressed in Dark Phoenix's costume, and is utterly confused. Mastermind reveals himself to her and explains that the Phoenix is responsible for causing his madness[2] and since he cannot act against her, he is taking vengeance against her teammates. He then taunts Pryor by making her think he is Scott, stealing a kiss, and laughing at her reaction as reveals his true form.

Cyclops continues to evade the X-Men in the jungle, however he must cross an open field to the exit of the danger room when Storm attacks him. But she throws off her lightning bolt, and as Cyclops hits her with an optic blast he wonders if she has figured out Mastermind's deception. Rogue catches Storm and lands between Cyclops and the door, but he uses a wide-angle blast the against the surrounding field of "Oz Poppies" to release the dust to render her unconscious. He shuts down all of the mansion's surveillance equipment so Mastermind won't know where he is, and then takes Rogue to the infirmary. There he wakes her and quickly touches her hand to Professor X's forehead so she will gain his telepathic power and then be able to read his mind and realize that Cyclops is not Phoenix. The remainder of the X-Men appear but before they can attack Cyclops he has Rogue telepathically connect all of their minds to prove his identity. Then Phoenix appears behind them and attacks Cyclops but he knows that it is just an illusion that cannot harm him. However a gunshot takes Cyclops down, which is detected by Wolverine who realizes that Mastermind is behind the attacks on the team. He lets Storm know that Mastermind is nearby and she summons a furious monsoon that blows the villain into a wall and knocks him senseless. Wolverine pops his claws and goes for the kill, but Storm prevents him from executing the villain. Scott recovers and finds Madelyne lying face down in a pool of water left from the storm; he rushes over to resuscitate her.

Later, Scott lays flowers on Jean Grey's grave at the cemetery of St. Stephen's Chapel at Bard College. He returns to Xavier's school where he and Madelyne are married in the company of friends and family.

"From the Ashes." Dark Phoenix Returns--? Double-sized. Of course.