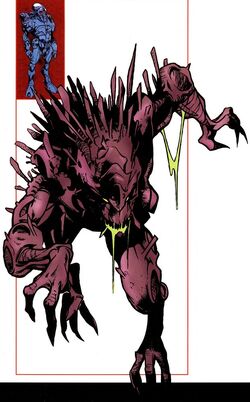 Once called "the Works", the Uncreated are warlike and seek the extermination of all religions and religious species. Slightly larger and stronger than humans, they have claws and are covered with quills. Uncreated are capable of communicating with humans, but it is unclear whether this is through speech or some form of telepathy.[citation needed]

The Uncreated claim that they did not evolve naturally, but were instead created by a powerful creature which they worshiped as a god. For a time, they lived peacefully and revered their creator, but eventually they became frustrated by its existence and superior power. Eventually they traveled into space, found a creature that they identified as their creator and killed it. They renamed themselves the Uncreated and convinced themselves that they had destroyed God. Discovering that many other species still worshiped, they set out to exterminate all religions.[citation needed]

Uncreated spaceships are highly advanced, comparable in power to those of the Shi'ar. Their warship designs emphasize superior firepower rather than armour or agility. The Uncreated also utilize advanced biological weapons: examples include a flesh-eating virus triggered by strong emotions and large spider-like creatures that can be programmed to exterminate all creatures with a specific genetic sequence.[citation needed]

After a small Uncreated ship crashed on Earth, the ship and surviving crew members were seized by the secret organization Black Air and taken to the base designated 'Dream Nails' for experimentation and investigation. When Excalibur members Kitty Pryde and Pete Wisdom later broke into the base, Kitty encountered some of the Uncreated, who had already escaped. After explaining their history, they unsuccessfully tried to kill her. Shortly after this, the base was destroyed in an explosion and the Uncreated were presumably killed.[citation needed]

At least one of The Uncreated were a member of the Shi'ar Imperial Guard's Praetorians that faced off against the Nova Corps during the War of Kings.[1]

Can breathe the air on Earth.[citation needed]

Retrieved from "https://marvel.fandom.com/wiki/Uncreated_(Aliens)?oldid=5345389"
Community content is available under CC-BY-SA unless otherwise noted.